Trump forgets how to say, "You're Fired" and other news of the day

Union Busting Busted
• With the death of just one man, the right of public sector unions to force members to pay at least some membership dues has been preserved.

The Loss of Patty Duke
Patty Duke, one of the Northwest's most iconic actresses, has died.

Bodices! Will! Be! Ripped!
writer of sexy paranormal Viking stories has received a double honor from the Romance Writers of America.

If Every Session is Special.... None of Them Are!
Breath easy. The Washington legislation session is over for another year, bringing our long, national nightmare of snarky Rep. Michael Baumgartner tweets to a close. For now. For now. (Spokesman-Review)

We've All Been There, Man
An attempt to reconcile a relationship has ended with a woman allegedly stabbing her boyfriend in the stomach. (Spokesman-Review)

This Never Would Have Happened At Washington Water Power
You know how hard it can be to work through the bureaucracy at Avista just to answer a simple question? The Spokane Police feel the same way. (KREM) 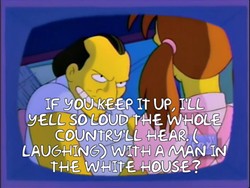 The Simpsons
Trump Campaign Manager Corey Lewandowski (artist's visualization)
• Trump campaign manager Corey Lewandowski has been charged with simple battery after he forcefully grabbed then-Breitbart reporter Michelle Fields. Security cameras, audio recorders, and a Washington Post reporter witnessed it. Fields tweeted photographic evidence of bruises. But Trump can't seem to remember that iconic reality-show phrase — what was it again? "I'm asking for your resignation?" "Turn in your gun and badge?" "You've been made redundant?" "We're moving in a different direction?" — and ditch the guy.

Instead, Trump has cycled through a variety of contradictory rationale, including that she was making the whole thing up, that those bruises could have come from anywhere to — and to be clear, this came from a presidential candidate and not a Saturday Night Live sketch — that the pen Fields was holding could have been a tiny bomb, and Lewandowski was playing the role of an amateur Jack Bauer in saving his boss.

Let's Break A Deal
Remember when Republicans got Trump to sign a pledge saying he'd support the presidential nominee, even if it wasn't him? They thought they had a deal? Well, Trump is altering the deal. Pray he does not alter it further.  Really, that's what happens when you trust Dealbreaker Jones. And the other Republicans are following suit.

From A to Zika
They hated . They couldn't stand . But a team of rival scientists will have to put aside their differences and learn to work together on one... last... mission. The Zika Job.