Tiny houses in Spokane, tiny hands win primaries, and headlines of the day 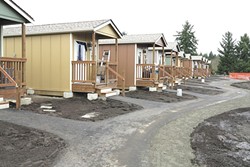 Tim Ransom photo
More teenie-weenie houses like these, from Olympia, will be coming to Spokane
ON INLANDER.COM

Is not the hiccups... Isakov!
Gregory Alan Isakov is coming back to Spokane, and he's bringing his band of musicians with him.

The Phaaaaaaaaaaaaantom of the Opera is (coming) Here
Here are the big Broadway shows coming to Spokane. And no, Hamilton is not among them.

Jackson Hits Jackpot
The Spokane Valley City Council may be deeply fiscally conservative. But the sudden way they fired City Manager Mike Jackson has resulted in them agreeing to pay a $411,000 settlement. (Spokesman-Review)

Hold My Closer, Tiny Houses
• The Spokane City Council (including conservative Mike Fagan) have been throwing their support behind itsy-bitsy houses. We wrote about the movement two years ago. (KXLY)

Center
• Some minority students from aren't happy the proposed multi-cultural center would be smaller than desired. (Spokesman-Review)

Making Again
Trump has pivoted! Trump has become conciliatory! Trump is becoming more presidential! The insult comic Trump is a thing of the past! Trump is... making fun of Kasich for the way Kasich eats pancakes? Trump is... oh God... Trump is saying that Hillary Clinton would only get 5 percent of the vote if she were a man?

Trump Abhors a Vacuum
• Trump absolutely crushed it last night. Like, even-if-Cruz-wins-Indiana-it-may-not-matter-levels-of-crushed-it. Part of the reason? Trump thrives where the Republican Party is comparatively weak, in the Northeast and New York. It's in places like Idaho and Texas where he stumbles. Meanwhile, Cruz is making a major announcement at 4 pm today.

Our guess? He's going to launch a new attack into the way Trump eats pizza.

Bern Out?
It has become essentially impossible for Bernie Sanders to win. Can he settle for making Hillary feel a bit more of the Bern?