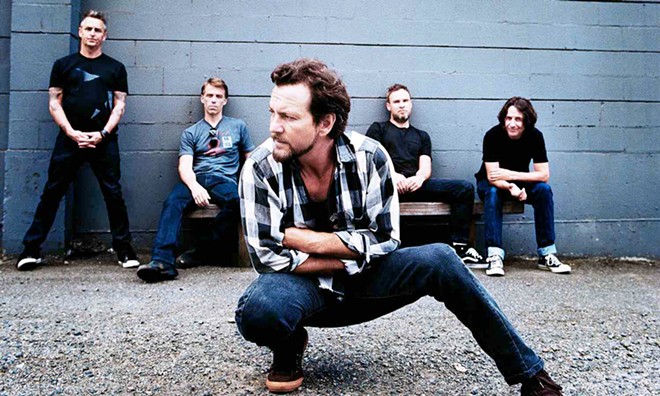 Pearl Jam is pretty much guaranteed to be inducted into the Rock and Roll Hall of Fame in 2017.
Bank on Pearl Jam. Bet on Joan Baez and Tupac. And argue among yourselves about the relative merits of ELO vs. The Cars vs. Chic.

The Rock and Roll Hall of Fame announced its list of candidates for induction in 2017, and as always, there is plenty for music geeks to debate beyond simply the existence of any sort of "hall of fame" dedicated to music that's historically been all about rebelling against the authorities and mainstream acceptance. Obviously the Rock Hall includes everything from folk to hip-hop as well as traditional guitar rock, so let the arguments commence on the merits of the nominees.

To be eligible this year, artists had to release their first single or album in 1991 or before, so this year's first-time nominees include Pearl Jam, Jane's Addiction and Depeche Mode. There are also several artists making a return appearance to voters' ballots, including Yes, Janet Jackson and The Cars. Each year, only five artists are selected; last year's inductees included Cheap Trick, Deep Purple, Chicago, N.W.A. and Steve Miller.

Besides the 800 industry folks who vote, you can cast a vote as well; the top five selections of us regular folks' will make up a "fans ballot" that will help ultimately decide this year's inductees. You can go vote right here.

Below, you'll find the complete list of nominees that you can vote for, along with my analysis of how likely the artist is to be inducted in 2017. Please, no wagering (unless I get a cut):

ON THE BALLOT FOR THE FIRST TIME
Pearl Jam — Probably the only sure thing among the newly eligible artists, thanks to the band's longevity, myriad good works for charity and fans' rights (ie. fighting Ticketmaster) and their continued relevance on the tour circuit. Chance of induction: 100%

Tupac Shakur — The Rock Hall was slow to warm to hip-hop, but now that Beastie Boys, Run-D.M.C. and Public Enemy are in, Tupac seems the natural next rapper, followed by Notorious B.I.G. at some point. Chance of induction: 70%

Depeche Mode
Depeche Mode — Hugely influential in the early days of synth-pop and so-called "alternative" music, and they're still making new music and playing huge shows. But the Hall leans old-school classic rock, so no guarantee for this guys in their first year. Chance of induction: 60%

Electric Light Orchestra — They play the classic rock that Rolling Stone and Rock Hall founder Jann Wenner just loves, so their chances are probably better than they should be. But I don't think they're big enough to get in on their first try. Chance of induction: 50%

Jane's Addiction — One of my favorite bands at one point, and they founded Lollapalooza, which was a huge deal in the U.S. They only have two great albums, but Guns 'n' Roses got in with less. Chance of induction: 25%

Journey — Inescapable hitmakers for much of the '70s and '80s, despite many lineup changes. I would hope the fact they continue with a soundalike singer instead of Steve Perry would count against them, but voters might want to see a reunion with Perry at the induction ceremony. I do not. Chance of induction: 40%

Joan Baez — I'm actually surprised she's not in already, given her significance to '60s folk and her ongoing career as a political rabblerouser. Chance of induction: 60%

Steppenwolf — Few people can name a Steppenwolf tune besides "Born To Be Wild." Not bloody likely. Chance of induction: 10%

Bad Brains — Washington D.C. punk pioneers who blend hardcore and reggae. If there were a Punk Rock Hall of Fame, maybe. Chance of induction: 5%

Her name is Janet. Ms. Jackson if your nasty.
Janet Jackson — In the news lately due to her pregnancy at 50, Jackson had her moment as a pop-culture mover and shaker, but it's been a while. Chance of induction: 40%

The Cars — Personally, they're my favorite band among all this year's nominees, and they come from an era that the Rock Hall just loves. But Boston's best band (sorry Boston and Dinosaur Jr.) ain't getting in. Chance of induction: 20%

The Zombies — British rock pioneers who deserve to have some tunes playing at the Rock Hall, but probably not an induction. Chance of induction: 10%

Yes — I loathe prog-rock for the most part, but even I can recognize these guys were leaders of the genre. With a career spanning decades, and fellow prog-rockers Rush already inducted, I think they're in this time. Chance of induction: 60% 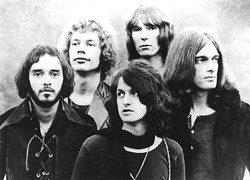 Prog-rockers Yes, in one of their many iterations.
Chaka Khan — A vocal powerhouse as a member of Rufus and solo artist, it's hard to say she influenced other artists much — always something the Hall voters look for. Chance of induction: 20%

Chic — This is the funk-rock group's 11th time on the ballot, which is insane. I had no idea just how many classic disco, funk and soul tunes leader Nile Rodgers wrote until seeing Chic earlier this year. I think 11 might just be the lucky number. Chance of induction: 60%

J. Geils Band — Rolling Stone has an inexplicable love of these Boston dudes, who definitely made some great songs through the years. But Hall of Famers? Nah. Chance of induction: 10%

Joe Tex — A Southern soul pioneer in the '60s and '70s and one-time rival to James Brown, Tex would be a great addition, but I think he's too obscure. Chance of induction: 10%

Kraftwerk — Truly, they deserve a spot simply for inspiring the fake band Autobahn in The Big Lebowski. But they also deserve it because without Kraftwerk, there would be no Daft Punk, Depeche Mode, OMD or myriad other synth-based groups. Chance of induction: 50%

MC5 — Political punks out of Michigan, they definitely helped create an entire genre that would eventually include everyone from the Ramones to The Clash to Nirvana. And they wrote one of the best rock and roll songs ever. But they're too scary for the Hall. Chance of induction: 20%

So, looking at my guesstimates, it looks like I'm predicting the 2017 Rock and Roll Hall of Fame inductees to be: Pearl Jam, Depeche Mode, Joan Baez, Tupac Shakur and either Yes or Chic. Stay tuned to see how off I am.