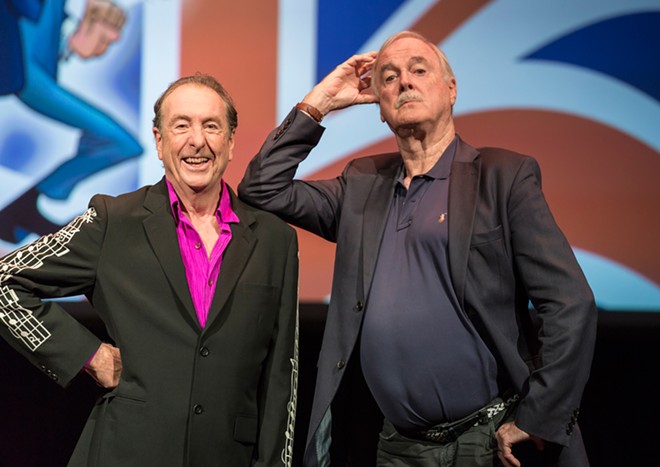 Monty Python founders Eric Idle (left) and John Cleese are coming to Spokane Friday.
We're barreling toward the end of October and Halloween, so get your costumes prepped and pumpkin-spice drink of choice prepared to hit the town. There are plenty of options in our event listings and Staff Picks for your perusal.

FILM | Gene Wilder had so many iconic film roles in his life that it’s hard to pick just one that best represents the man’s incredible comedic chops. While you can certainly make the case for Willy Wonka, I’m going with Dr. Frederick Frankenstein from Mel Brooks’ 1974 flickYoung Frankenstein — although he would prefer if you pronounced it “Fronkensteen.” It's showing at the Bing Crosby Theater tonight.

LIVE MUSIC | Get your roots-music on with the mighty fine Jared & the Mill, headlining a show at The Bartlett. Here's a little sample:

WORDS | Gonzaga political science lecturer Sean Swan is featured at a free talk on Europe at a Crossroads in the school's Magnuson Theatre.

LIVE MUSIC | Like it funky? Then you'll like the Super Sonic Soul Pimps, who are headlining a show at the Red Room Lounge tonight. Here's a sample:

THEATER | The Modern Theater-CdA continues its run of the Pulitzer Prize-winning 'Night Mother, running through the weekend. The psychological drama tells the story of Jessie Cates’ last night alive, opening as she nonchalantly tells her mother Thelma that she plans on committing suicide before the sun rises in the morning.

COMMUNITY | It's Spokane is Reading time again, so join your fellow book lovers and listen to author Anthony Marra discuss his collection The Tsar of Love and Techno. Here's our story about the event.

COMEDY | When it comes to comedy legends, they don't come any bigger than the men in Monty Python, and two of them — John Cleese and Eric Idle — are coming to Spokane for a show that will feature some memories, original sketches and favorite old clips. They're performing at the INB at what is sure to be a show to remember. Watch for an interview with Cleese in the new issue of the Inlander coming Thursday.

WORDS | The EWU Visiting Writer Series continues with Heather McHugh, a recipient of the MacArthur genius grant and renowned poet. She'll appear at Auntie's at 7:30 pm.