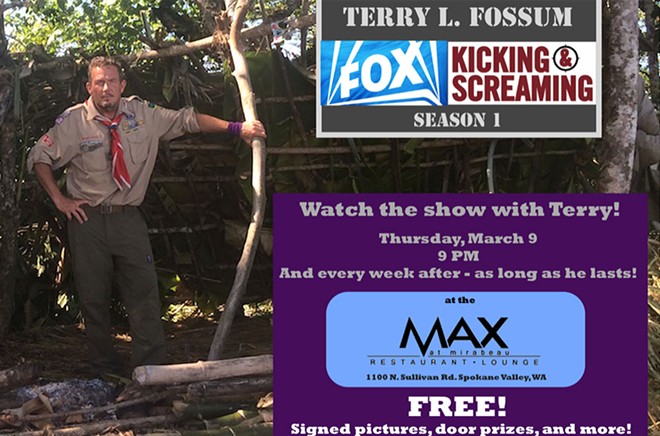 Terry Fossum will be appearing at viewing parties of the Fox survival show Kicking and Screaming as long as he, you know, survives.
It’s not common that 52-year-old retirees replace their empty nesting with survival competitions on Fijian tropical islands, but that’s where Terry Fossum found himself in May last year.

The former Scoutmaster for Spokane Valley’s Troop 400 is one of the expert survivalists on Fox’s reality show Kicking and Screaming. Produced by the people behind Wipeout and Fear Factor, the program pairs outdoor specialists with complete novices in a competition for $500,000.

“It was the show’s goal to team us up with our exact opposites, and they did a fine job,” Fossum says. He is partnered with Natalie Casanova, a foul-mouthed, tattooed gamer and YouTube personality. “Of course she’s looking at it from her perspective as, ‘Here’s all these young studly men and women and the old scoutmaster. Great.’”

The show was as hard for the old Scoutmaster as it looks. The contestants were dropped off in the jungle with minimal resources and spent most nights sleeping on the ground. “It was 100% survival,” Fossum said. “We were starving. We had to build shelters. We were doing real survival and the novices with us had never spent a night outdoors. We were set up for failure and it was fantastic.”

Fossum competed against survivalists ranging from snipers, seers, primitive living backcountry guides — even a ninja. But the training from his years as a scout held up throughout his time competing.

“It was better than even I expected,” Fossum said. “I’ve been doing Boy Scouts all of my life. We’d like to think that we’re pretty good. I get out there with these survival instructors and special forces guys and I realize, you know what, we are really good. I was surprised.”

Fossum made multiple excursions to prepare for the show. He flew to Rupununi in Guyana to gain jungle experience from local experts. He went to Park City to work on his bow and drill fire-starting. He spent time in Houston learning from a recluse that previously lived on an island alone.

But he also credits his time outdoors in Spokane. “I have a lot of experience in the mountains up here,” he said. “A few years ago, when it was like -20 and everyone was going, ‘Stay inside, stay inside,’ I went backpacking. I put on my snowshoes and climbed to the top of a mountain and loved it.”

Fossum originally came to Spokane by Air Force assignment in 1988, but stayed after his stint was over. He’s now retired, married and vice president of programs for the Inland Northwest Council of Boy Scouts of America. “I fell in love with the people and surrounding areas and got immersed in the community.”

Fossum will be attending viewing parties for “Kicking and Screaming” as long as he remains on the show. The free events are on Thursdays at 8 pm at the Max restaurant in the Mirabeau Park Hotel in Spokane Valley. The first viewing party is tonight.

The survivalist hopes to continue his engagement with the community well past the runtime of the show.

“My goal in life is to help as many people as I can before I die. I was born in the poorest city in the United States. I was on the wrong end of an assault rifle in junior high. I am really into inspiring kids and everybody in any way that I can, especially those that have obstacles that need to be overcame.”