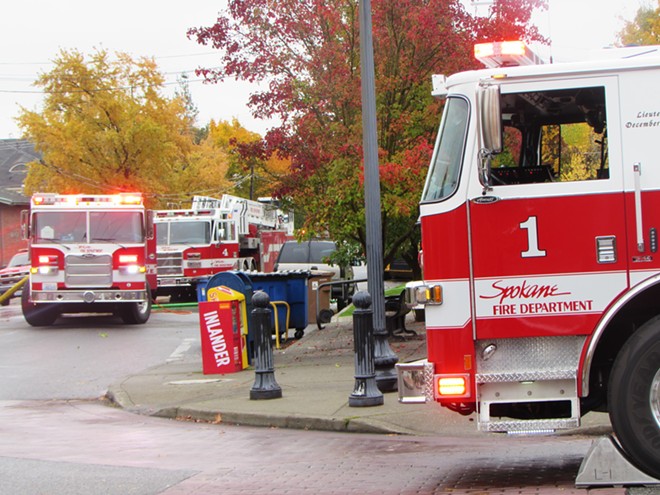 Daniel Walters photo
The firefighters union hasn't necessarily been pleased with the way the national fire chief search has gone so far.
Soon, Mayor David Condon will choose the next boss for the city of Spokane's firefighters. But some local firefighters are feeling like they've had little influence on the selection so far.

"The process, from our perspective, hasn't been as inclusive of labor as we would have liked," says Randy Marler, vice-president of the Local 29 firefighters union. "From that regard, it hasn’t felt like we thought it would go. We thought we’d have more firefighters, more labor, more say in the process."

Instead, no Spokane firefighter was even a part of the screening committee that whittled down the applicants for the next fire chief to five candidates.

"We’ve just been excluded so much, I’ve just stopped asking questions because we aren’t getting anything," Marler says.

City spokesman Brian Coddington, however, points out that the union submitted a letter outlining what they wanted in a fire chief before the process began.

He notes that the final five candidates have been undergoing interviews with three panels today, which includes fire union representation. Coddington says union members are also welcome to attend tonight's public forum at 6 pm at the East Central Community Center.

Compounding frustrations, Marler says that Fire Station 4 Capt. Andrew Bessmer was weeded out before the interview process, despite his considerable qualifications.

"He's a station captain. He’s a full-bird colonel in the Army... He’s managed budgets and done plenty of administrative work. He’s insanely qualified," Marler says. "He was taking out of the process by HR. He never even had a chance to interview, to go to a selection committee."

"There was another internal candidate that had a lot of support from the rank and file," Stuckart says. "Why did that person get eliminated?"

Bessmer says that he was sent an email from Meghann Steinolfson with the city's HR department, saying he "didn’t meet the minimum qualifications."

"I didn't ask her why I didn’t meet the initial qualifications," Bessmer says. "I think I’m pretty qualified with firefighting in Spokane."

He suspects the issue might have been the mandate requiring at least five years of fire administration experience.

"The chosen candidate must have 10 to 20 years of progressive fire protection and emergency management experience with at least 5 years at an administrative or comparable level," the job posting reads.

While he's been a fire captain for only three years, Bessmer notes that he's spent 22 years working for the Spokane Fire Department.

"I've probably been on 12 to 15,000 calls for service," Bessmer says. "I understand the issues I was facing, the line, the firefighting experience."

Bessmer's cover letter detailed his experience as a
click to enlarge

It discussed his three tours in and his leadership and advisor roles in all three.

"During my last tour in 2012, I led a diverse team of 32 NATO officers from 8 different nations that advised the Afghan National Army training command," his cover letter read.

"I thought my military experience might at least get me some points. At least have some people ask me some questions," Bessmer says tells the Inlander.

The letter sent from Local 29 to the mayor concerning the fire chief selection process suggested that the chief need to have "demonstrated operational leadership experience" but also noted that "internal candidates can derive leadership through other means but would need to be Captain level or above."

Indeed, in the Condon has made major hires when they explicitly did not meet the minimum job descriptions, such as his hire of former Division Director of Business and Development services Jan Quintrall, who did not have the minimum qualification of a college degree and eventually resigned after being involved in numerous controversies. But in this instance, HR rejected Bessmer immediately.

With this context, some firefighters are raising questions about the close working relationship that Steinolfson, who handles HR matters with the fire department, has with interim Fire Chief Brian Schaeffer, who union firefighters widely see as the mayor's preferred choice for the job.

"I’m sure that she and Brian have talked about everything. All the applications," Bessmer says. "It should have been isolated from the HR rep at the fire department to somebody who didn’t have that close of the relationship."

In particular, concerns were raised about an email Steinolfson reportedly sent out encouraging members of the fire department command staff to come to the fire chief public forum tonight in order to support Schaeffer.

Steinolfson did not immediately respond to a message asking about the email, but in a phone call Thursday afternoon, Coddington confirmed such an email had been sent.

"I just recently became aware of that email," Coddington says. "It’s unfortunate that it did create that perception."

But Coddington says that the email was sent in response to questions Steinolfson had received about how people could show support for Schaeffer. He stressed that the Mayor, not HR, will make the final call on hiring the fire chief.

The pool started with 28 initial candidates, Coddington says. Of those, 20 were deemed qualified by HR, and invited to submit a video and a written questionnaire; 17 of the candidates did.

A screening committee then winnowed it down to the top five.

"I will say this for HR, it’s a challenging process and they seem to me, just objectively, that it’s well-organized, that it’s done well, and better than the police chief process," says Beggs. "I feel like they’ve learned some lessons from that."

Coddington says he believes the final candidates have been pleased with the process as well.
"The indications are that they feel good about the process," he says. "Every effort has been made to make sure the process is as smooth as possible."

But the among the union, frustrations around the process remain.

"It is the mayor’s appointment. He could have just chosen Brian Schaeffer and say that it’s done," Marler acknowledges. "[But] it doesn’t appear that the process has been fair... That’s not to say that I don’t think Chief Schaeffer wouldn’t have risen to the top if it had been."

Bessmer says he's that he sees a lot of strengths of Schaeffer, but also weaknesses.

"He’s well-connected. He’s a smart guy. He’s worked his entire career to make it to this point. That’s his ultimate goal," Bessmer says. "Good for him, if that’s his goal. [But] I think he’s overlooked the fire department in his own personal goals."

Schaeffer was not immediately available to respond to Bessmer's critiques.

"There are some crazy policies that have come out of this administration," Bessmer says. The department requires each station to have a paramedic on staff at all times. And if they don't, they'll call in a paramedic for overtime, even if the station is overstaffed. That cost the city large amounts of money.

"I applied because I thought I could make a difference," Bessmer says. "I didn’t make the cut. I’m perfectly happy being the station captain at Four. I love the job, I love the guys, I love the people, I love the work."

The fire union can wield considerable sway in this city. They've been ardent supporters of local Democrats and major donors to city council campaigns. In 2014, Stuckart was penalized by the city's ethics commission for forwarding a confidential email to the union's president.

But even with union protection, Marler says many firefighters are reticent to speak up, fearing retaliation.

"I don’t think our guys are comfortable speaking out about this mayor," Marler says.

The Smokes are leaving Spokane, but you have one more chance to see them Friday