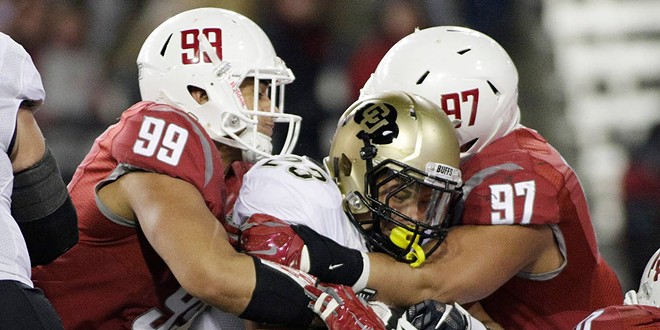 WSU Athletics
Cougar fans would love an outcome at Martin Stadium like 2015, when Washington State throttled Colorado 27-3.
Well, no one saw that coming.

That was the case last Friday night, when Washington State was not just routed but exposed in Berkeley, definitively knocked from the unbeaten ranks in a 37-3 loss that ranked with the worst defeats the Cougars have suffered in 42 trips to Memorial Stadium since 1924.

The numbers seemed fictional, but they were all too real: Luke Falk was sacked nine times and threw five interceptions, both career highs, and more than half of the Cougars' 13 possessions ended in turnovers: seven, to be exact. WSU saw two touchdowns — including freshman Renard Bell's return of the opening kickoff — erased due to penalties, averaged less than a yard per rush on 26 attempts, and was a woeful 4-for-17 on third down.

Cal had only beaten one Top 10 team in Berkeley in the past 40 years, but the Golden Bears did just about everything right against a WSU team that was outplayed, outschemed and outcoached, making a clear statement: We don't deserve to be ranked No. 8 in the nation.

And it was no less true two days later, when Bill Moos, WSU athletic director for 7½ years, with deep connections to Pullman in particular and the Pac-12 in general, bolted to become athletic director at Nebraska — a school where football is, and always will be, king — pulling up roots and leaving in the middle of football season for a school and a conference (the 14-team Big Ten) he lacks any ties to. Moos' base salary in Lincoln is $1 million per year, more than twice what he was making at Washington State.

In the space of less than a week, elements of doubt and uncertainty have crept into WSU's football program and athletic department. A 6-0 start that had Cougar fans dreaming big vanished, and coupled with the Huskies' debacle in the desert the following night, some of the shine — unrealistic though it may have been, in retrospect — is off the Apple Cup.

And there's a Colorado team coming to Martin Stadium on Saturday night, aka Homecoming (7:45 pm; ESPN, KXLY 920 AM) that rallied in the final minutes for an emotional win on the road — even if it was just Corvallis.

The Buffaloes have had all week to break down the way the Bears took apart the Cougars and figure out how to follow suit, adapting a brilliant game plan by first-year Cal coach Justin Wilcox and defensive coordinator Tim DeRuyter (the Bears dropped several defenders into coverage, limiting Falk's options, but still managing to create constant pressure on the Cougs' QB out of a basic four-man rush by varying which four rushed,  keeping the beleaguered Falk running for his life all night) to their own personnel.

One thing is for sure — if Colorado can fund a way to slap the Cougars around in Pullman the way Cal did in Berkeley, this season will take on a new, unanticipated dimension, and a bowl game for Washington State, though assured, could very well take place in a city lacking direct flights from the Northwest, and against a low-wattage opponent.

The one bright spot in defeat: Unlike the previous week at Oregon, the Cougars (6-1, 3-1 Pac-12), who tumbled to No. 15 in the AP Top 25 poll,  suffered no significant injuries. But they'll take the field without Falk's top target, wide receiver Tavares Martin Jr., and his 37 receptions, 502 yards and seven TDs, suspended for "immature behavior" after the loss to Cal and missing a practice.

This Colorado team (4-3, 1-3) isn't anywhere near as good as the one that handed the Cougars a 38-24 loss last November in Boulder, the first of three consecutive defeats that ended last season on a down note; that Buffaloes team won 10 games, going 8-1 in conference play and capturing its first Pac-12 South title.

The difference is mostly on defense — five members of last year's unit are on NFL rosters or practice squads, though the biggest loss was coordinator Jim Leavitt, who performed miracles in his two seasons in Boulder, then got an offer he couldn't refuse from Oregon. Last year's unit gave up a little over 18 points per game in conference play; through four Pac games (three of them losses), these Buffs are getting torched for nearly 36 points per.

That would seem to be good news for a Washington State team which averaged nearly 40 points per game (albeit against a fairly soft schedule) before last week's flameout, but the forecast for Saturday night in Pullman — heavy rain and winds gusting as high as 45 mph — means that the Cougars' passing game, even if they can figure out a way to keep Falk upright, is unlikely to be much of a factor. They'll have to run the ball effectively to win. And the best running back on the field — with all due respect to WSU senior captain Jamal Morrow — is unlikely to be wearing crimson and gray.

Cal's unheralded Vic Enwere gashed the Cougs' shaky D for 102 yards and a touchdown, and Colorado senior Phillip Lindsay — who has racked up 466 yards and five TDs the past two weeks, is 5 yards shy of 1,000 after the season's first month and a half, and features the Pac's (if not all of college football's) best afro — is more than capable of doubling those numbers.

Alex Grinch's defensive unit — which started strong this season but always seemed a step behind against Cal, particularly at inside linebacker, where injuries have forced inexperienced players into starting positions — must find a way to recapture its mojo, or it could be a long, cold, soggy and ultimately disappointing night at Martin Stadium.