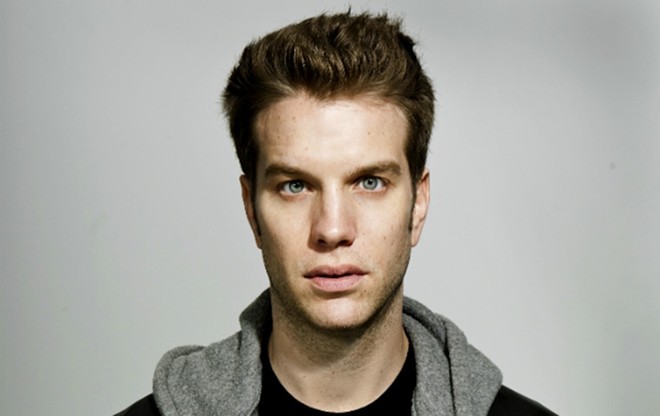 Standup comic Anthony Jeselnik headlines at the Spokane Comedy Club Thursday through Saturday.
Barreling towards Halloween and November, there's still time to take advantage of October with some of the groovy good times found in our event listings and staff picks.

MUSIC | Mastodon are one of the bright lights of modern metal, delivering intricate songs and consistently great albums over the last decade or so. On this tour, they're bringing the joyfully scuzzy Eagles of Death Metal and instru-metal cats Russian Circles along for the ride for their show at the Knitting Factory. Here's a little Mastodon sample for ya from their excellent new Emperor of Sand album:

MUSIC | Penny and Sparrow bring some haunting indie-folk to the Bartlett for a sold-out show. Read our interview with the band, then try to find some tickets online.

COMMUNITY | Celebrate our dearly departed art master Bob Ross with a fun birthday fundraiser for KSPS at Pinot's Palette on what would have been Bob Ross's 75th birthday.

MUSIC | Lyrics Born throws one hell of a live show — you might remember that from when he headlined Elkfest a while back. Tonight he's at the Red Room Lounge. Kosmos and Brotha Nature open the show.

FILM | The Best of RiffTrax Live brings the Mystery Science Theater 3000 gang back into theaters for a special screening of Night of the Living Dead. Perfect Halloween fare!

FILM | The Upper Columbia United Tribes are hosting a free screening of United By Water at the Garland Theater, a documentary about the historic traditional canoe meet-up between the tribes in 2016, their first since 1943.

MUSIC | This show is what we call a really, really big deal. Masters of droning, buzzy guitar rock and boasting hooks for days, The Jesus and Mary Chain were alt-rock heroes from the minute they showed up on the scene in the mid-'80s. After some years apart, they reunited a few years back and have a solid new album to support on tour, including this stop at the Bing, with Cold Cave opening. Here's some The Jesus and Mary Chain:


WORDS | Pie & Whiskey — it's not just for Get Lit! anymore! Now you can find a slew of the great stories from the live events gathered in a tasty little tome being launched tonight at the Washington Cracker Co. Building. Read our story about the process of creating the book here.

COMEDY | Anthony Jeselnik is simply one of the funniest comedians around, especially if you like your jokes shrouded in darkness. I do. He performs several shows at the Spokane Comedy Club this weekend. Here's a good test to see if he's your thing:


WORDS | Bedtime Stories Spokane brings together some of our finest Spokane authors to tell some original stories and raise money for Humanities Washington's projects. This year, Sharma Shields, Thom Caraway, Shann Ray and Kate Lebo join up for a night that will also honor Jess Walter.

FESTIVAL | Spokane Oktoberfest is going down at the Spokane Convention Center, so bust out your lederhosen and get there.