After nearly a year-long hiatus, one of the Inlander's long-running blog series is back. That's right, cat-loving ladies and gents: Cat Friday is back in the rotation, now on a monthly basis, from yours truly, the Inlander's resident cat-lady-in-chief. To keep the series fresh and new, we'll be posting installments on the second Friday of each month.

First up for the series' rebirth is a round-up of some of my personal favorite cat-stagrams you should be following right meow. Let's get started. 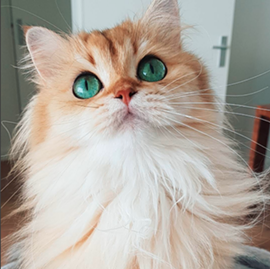 Instagram: @smoothiethecat
Smoothie: stealing hearts since 2014.
@smoothiethecat
Beyond my personal cat — the joy of my heart and life (along with her predecessor, and my family's dear little senior girl, Alice) — this cat named Smoothie is literally the top highlight of my cat obsessions. Every time I see a picture of this precious, emerald-eyed puffball my heart aches (I can't even handle the cute). Smoothie, a golden-shaded British Longhair born in April 2014, resides in the Netherlands and has been stealing hearts across the globe alongside her silver-haired friend Milkshake for several years now. Don't let this petit chat fool you with her wide, innocent eyes. Smoothie is often up to some seriously cute shenanigans, as revealed in her ultra-relatable photo captions like, "When you just want to work, but your cats have other plans" and "When someone tall sits in front of you at the cinema" and "When all the napping makes you feel exhausted." Honestly, if you're not equally mesmerized by the sheer beauty of this tiny, smooth-haired feline, you might need to re-evaluate some things. For a double dose of Smoothie sweetness, make sure to follow her on Facebook, too. 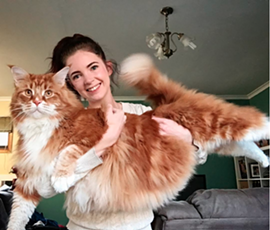 Instagram: @omar_mainecoon
Omar poses with his cat mom Stephanie Hirst.
Earlier in 2017, this Australian gentle giant made the rounds in blog posts and stories across the internet, and we all marveled over his magnificence and sheer size. Headlines prompted his world record-holding potential as the longest cat ever with a span of 3 feet, 11 inches. Omar weighs in around 31 pounds. Maine Coons, one of the largest cat breeds, are known for their characteristic massive, fluffy paws (for walking in snowy and icy climates), jowly faces and prominent ear tufts. If the breed had a modern monarch, Omar would be its crowned king. Check out this photo of the stunning ginger boy next to his canine sister Penny, a little sheltie. 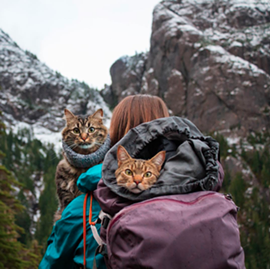 Instagram: @boltandkeel
These Canadian brothers got an early start to the adventure lifestyle.
@boltandkeel
Cat people everywhere often lament the fact that our furry companions tend to be less mobile outside the home as their canine counterparts. But not all cats hate to wear a harness, ride in the car, or even sleep in tents. British Columbia-based brothers Bolt and Keel have lived the adventurous lifestyle since kittenhood, traveling the most scenic wilderness landscapes by foot, canoe, kayak and even backpack with their two owners. It's a fitting lifestyle for two cats who were actually discovered abandoned as kittens in a remote area by their cat moms while out on a hike. After building up some serious numbers on their Instagram account, the kitties and their moms, Kayleen VanderRee and Danielle Gumbley, just released the book Bolt and Keel: The Wild Adventures of Two Rescued Cats, which chronicles their diverse outdoor adventures with the two brothers always in tow.

Instagram: @mingusthepanther
All teeth, no bite.
@mingusthepanther
It's canon that black cats are the preferred coat color of witches and other dark-minded beings, but Mingus the Panther brings an even more fitting trait to the "spooky" cat lore with his distinct vampire fangs. Residing in Stockholm, Sweden, this sleek, all-black Oriental shorthair is capturing hearts around the world with his delightful vampy overbite and goofy personality. Mingus, considered a senior cat at 15 years, is leash trained and enjoys traveling around the Swedish countryside with his mum. Make sure to watch some of his video clips with the volume up to hear his adorable raspy, rumbly vocalizations.

There's obviously plenty of just-as-adorable Instagram celebri-cats out there worth a follow, and trust me when I say I'm following A LOT of them — these four are simply some of my favorite discoveries in the past year or so. Which kitties make you smile when they pop up in your feed? Tell us on Twitter: @INCatFriday.