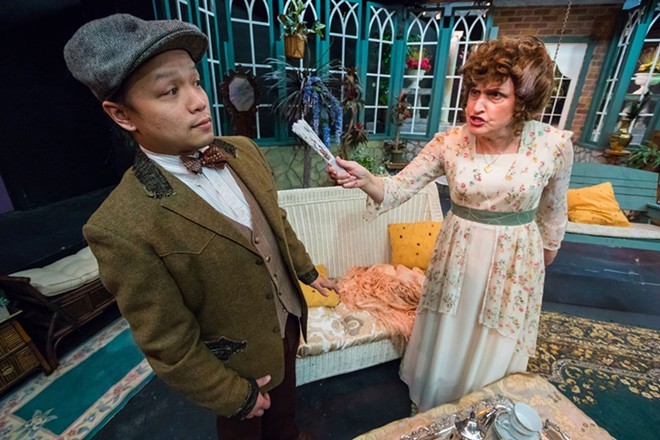 We're heading into May! Get me my shorts and flip-flops and let's find some ways to entertain ourselves this week:

MUSIC | The Gonzaga Symphony closes its season with a performance at the Fox featuring double-bass legend Gary Karr.

MUSIC | Head to the Observatory for the raucous garage-rock sounds of Pink Mexico, joined by Itchy Kitty and Runaway Octopus. Before you go, read our interview with the band.

COMEDY | Tab'z on Broadway, a relatively new club, is hosting comedian Aaron Woodall tonight, so have some laughs while scoping a new scene.

THEATER | Cirque Du Soleil takes its high-flying act to the ice with its new show Crystal, opening tonight at Spokane Arena. Read our story about the production.

WORDS | The MAC closes its series of talks from the Archaeological Institute of America with "What Price Culture? Destruction and Cultural Preservation in Afghanistan since 2001," a talk by Dr. Laura Tedesco. Tedesco oversaw and guided preservation efforts while posted in Kabul for 16 months. She currently serves as the Cultural Heritage Program Manager for the U.S. State Department's Bureau of South and Central Asian Affairs.

THEATER | Misalliance continues its run at the Spokane Civic, and the George Bernard Shaw comedy is well worth a visit.

FILM | The 50 Hour Slam Showcase features the completed works of a slew of aspiring filmmakers from the region. Find your next Spielberg or Duvernay, perhaps, in this night of short films.

VISUAL ARTS | It's First Friday, people! Get out there and get arty!

MUSIC | Color me intrigued. The Roadhouse hosts a Tribute to the Monsters of Rock tonight, featuring tribute bands Appetite for Deception and Vain Halen.

COMMUNITY | Art Salvage is finally opening their new store! Celebrate with them today.

FOOD & DRINK/THEATER | Wiley's in downtown Spokane is hosting the Bottoms Up! Brunch, a combination of burlesque show and delicious grubbin'. It happens on Sunday, too.