Noshing: For nearly four decades, locals have come for the food and drink at Charley's, returning again and again for its cozy, Cheers-like vibe 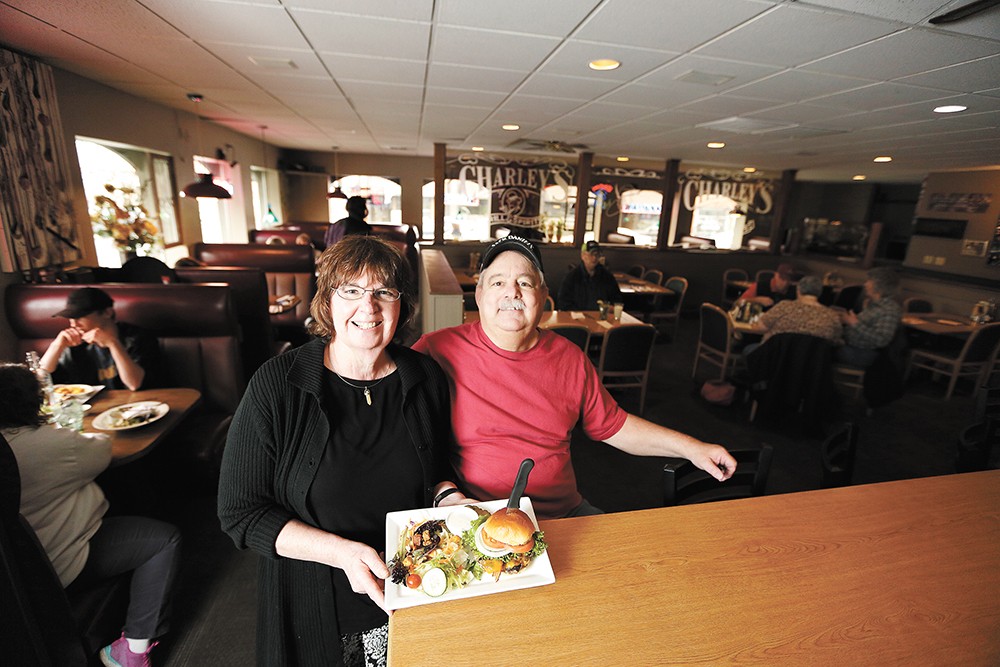 When you tally up all the places on North Monroe Street to grab a bite to eat,

no matter the meal, there are few places that have satiated appetites for food, drink, and good company for as long as Charley's Grill & Spirits.

The local pub opened back in 1973, but first sat across the street, at 1011 W. Broadway, from its highly visible, longtime spot on the corner of Broadway and Monroe. Back then, recalls owner Shirley Williams, the place was called Charley My Boys: A Tavern, named after an oft-uttered expression by the late comedian and actor W.C. Fields that had been adopted by the tavern's original owner. When an opportunity to buy the business arose, Williams and her husband Jack jumped right in.

"January 4, 1978, was the first day. My husband and I were very young," Williams recalls from the empty bar on a Thursday morning before Charley's opens for lunch.

"His dream was to own a bar, and he had worked for Charley's previous owner for about a year and fell in love with the customers and the neighborhood," she continues. "He's a fun-loving person, and at the time we bought Charley's, the [TV] program Cheers was on. He wanted to identify with that concept of a neighborhood place where people could come and feel comfortable and have a good time."

Jack is now retired from the day-to-day restaurant operations, but Shirley still manages the restaurant and oversees other aspects, like revamping the menu and planning to ensure that Charley's continues to be a neighborhood hangout for future decades. Next year, the couple celebrate Charley's 40th anniversary. Shirley is already dreaming up ways they can mark the momentous event, perhaps by bringing back original menu items and inviting former employees for a big party.

Just recently, Williams sat down with her Food Services of America rep to rework some of Charley's classic American pub food offerings — burgers, sandwiches, soups, salads and other entrées — to showcase more local ingredients, like produce and beef. She also slightly adjusted some prices to help compensate for Washington's minimum wage increase, but says she managed to do so without bumping prices too high.

On a Monday evening during happy hour (Mon-Sat, 4-7 pm), several older customers fill a few back tables. The lone bartender knows many of them by name.

Charley's location near the Spokane Arena continually draws customers before and after events there. Throughout the years, Charley's has also been loyally frequented by Spokane Civic Theatre cast and crew, as well as Spokane County employees arriving from next door. Waitstaff offer a 20 percent discount on food to folks who come by on their way to or from an event at the Arena, the Civic or other nearby venues.

Despite its old school — yet clean and inviting — interior, Charley's is adapting to the demand in current industry trends. Williams recently brought on nearby Tom Sawyer Coffee as a supplier, and eight of Charley's 12 beer taps are reserved for offerings from familiar, local names: No-Li, Twelve String, Iron Goat, River City and One Tree Cider.

"I have great satisfaction of where we've been and what we've done," Williams reflects. "I also feel we're in the best possible position we've ever been in from day one, with the fact that this neighborhood is becoming a destination place. Kendall Yards has very much been a driving force for the businesses here revamping and making changes." ♦

No matter your budget, the time of day or your hunger cravings, North Monroe from the bridge to the bottom of the hill is filled with a variety of local food spots to meet your needs. Joining Charley's as another longtime establishment, Milford's Fish House (719 N. Monroe) has been in business since 1980 and has a reputation for serving up some of the tastiest seafood in town. Just up the block, Chef Tony Brown's diminutive eatery Ruins (825 N. Monroe) is one of a few newer spots to open along this stretch. Ruins serves up sandwiches from the former Stella's Café during lunch, and its regularly rotating, small-plates-style menu keeps things fresh. Farther up the street, Prohibition Gastropub (1914 N. Monroe) is another newer face to the business district, opening in late 2015. The burgers there are a must-try. Craving Mediterranean food? Azar's Restaurant (2501 N. Monroe) has been a North Monroe staple for more than two decades. How about some tacos or a massive burrito? Gerardo's Authentic Mexican Food (2706 N. Monroe) has all the tortas, tamales, tacos and more. Fans of decadent breakfasts can get their fill of, well, waffles at Waffles Plus (2625 N. Monroe). Another tiny shop that packs a flavorful punch is Aloha Island Grill (1724 N. Monroe), a popular takeout spot for the lunch crowd and hurried drivers on their way home.