What We've Been... Watching

From nature docs to comedy, and superheroes to cinematic masters


Welcome back to the Inlander staff's semi-regular rundown of the cool and worthwhile things we've been into lately: words we've been reading, shows we've been watching, music/podcasts we've been listening to, games we've been high-scoring, and tasty treats we've been drinking/eating. This week, we're nerdin' out about some of the best moving pictures — a range of genres — to binge watch:

Legion embeds an effective commentary about stigmas of mental illness.
In this age of endless superhero mega-franchise reboots/prequels/sequels, it can be hard to stand out. Especially so if general audiences are not well-versed in the intricately nuanced universes of said franchises. But with Legion, the latest episodic installment in the Marvel cinematic universe, you really don't have to know a darn thing about the X-Men to understand and to enjoy the show. In fact, not knowing anything, or very little, about the mutants may just be what makes Legion so good. (It's better, for sure, than its ongoing Marvel universe counterparts on Netflix telling the origins of the Defenders: Luke Cage, Daredevil, Jessica Jones, Iron Fist.)

In part, Legion stands out because, as a self-contained story, we hear nothing about the X-Men of notoriety. No one mentions Wolverine, Storm, Professor X, etc. Instead, this story, in the simplest terms, revolves around a group of specially-abled mutants who are just trying to figure out how to control their powers/abilities while hiding from a militarized government that's hellbent on destroying them, or using them to its advantage. On the surface, Legion is a story about ostracized underdogs trying to find their place in the world, yet it also serves as careful commentary on the cultural stigma of mental illness. Main character David Haller (aka Legion, though we never hear him referred to by this name; and played wonderfully here by Dan Stevens of Downton Abbey and Beauty and the Beast fame) has been told all his life that he's schizophrenic, when, in fact, his symptoms have manifested as part of his inherent mutant powers.

Beyond a story that effectively reveals how that mental illness stigma has affected Haller's actions and worldview, and his coming to terms with the fact that he isn't actually "crazy," Legion boasts stunning visuals in camera work, special effects and sets. It's truly unlike any superhero origin or reboot we've seen yet, and I can't recommend it enough. Legion's eight-episode first season just wrapped Wednesday night; the show has already been renewed for a second season. (CHEY SCOTT)
THE FILMS OF NICHOLAS RAY
click to enlarge

You may know Ray's most famous film; but his others are just as worthy.
I’m way behind on TV, but I’ve been chipping away at the extensive filmography of director Nicholas Ray (1911-79), whose work has always been a blind spot in my cinematic knowledge. Though he went mostly unheralded by American critics during his lifetime, Ray’s now considered a visionary and was one of the primary influences on the French New Wave movement of the ’60s. Even if you don’t know Ray by name, you certainly know his most famous movie — 1955’s Rebel without a Cause — which posthumously enshrined James Dean in the pantheon of all-time big-screen icons. Ray’s lesser-known works include the Humphrey Bogart noir In a Lonely Place (1950), maybe the director’s finest achievement; 1954’s bizarro feminist Western Johnny Guitar, starring Joan Crawford, of all people, as a staunch gunslinger; and the alarmist domestic drama Bigger Than Life (1956), in which a schoolteacher (James Mason) becomes a maniac after experimenting with a miracle drug. I find Ray such a fascinating artist because each of his films is distinct — and he dabbled in just about every genre — and yet there’s no obvious visual or thematic unifier connecting them. They’re all, however, way ahead of their time in terms of content and approach; check one out and you may be shocked at how contemporary it seems.  (NATHAN WEINBENDER)

PLANET EARTH II
Watching BBC’s Planet Earth II, much like the first Planet Earth released more than a decade ago, is an experience unlike any other on TV. Nowhere else can I see, with such clarity, the struggles of a frog defending his babies from some mean wasps, or the feud between golden eagles for a fresh carcass in the mountains, or the dancing rituals of a male bird trying to land a mate.

But I have one major problem with Planet Earth II: Where are the successful hunts? Watching this show, you would think that all predators are smarter than prey and able to avoid being eaten, unless that prey is an insect (because who cares about insects anyway?). The most memorable parts of the original Planet Earth are the scenes that revealed the awesomeness and tragedy of nature, the great white shark attacking seals in slow-mo, or the pride of lions taking down an elephant. In Planet Earth II? A pride of lions will be wandering the desert, ready to die unless they have one more successful hunt. They will try to take down a giraffe, but the giant beast running for its life will trample over the lion, leaving the pride hungry for one more day. 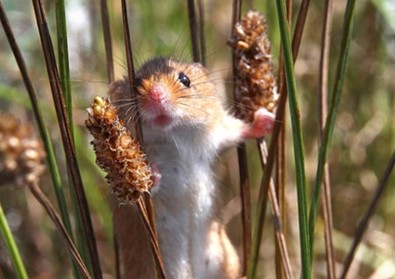 Sure, no one wants to see this cute little mouse get eaten, but how else will the predators survive?
Other scenes go something like this: There’s a cute animal with a cute, simple little life — a mouse jumping across blades of grass, for example. But wait, there’s this totally awesome owl out there that relies on killing these cute animals for food! What’s gonna happen? In this show, predictably, the predator will make a weak attempt, fail, and David Attenborough will whisper, “not today.”

With only one exception I can think of — the scene where some helpless piglets are snatched up by leopards — we never see a mammal losing to a predator. How do these predators ever eat? How can they ever survive? Are we to believe that someday, our planet will be overrun with adorable mice and goats and lizards, transformed into one giant Pixar movie where the little guy always wins?

To be clear, I like mice, and giraffes, and all animals. I wish predators could just live on Soylent and we could all get along. But this is not the way the world works.

Often, the little-guy-makes-it-out scene makes for captivating drama, like when an iguana narrowly escapes a snake attack. I still enjoy watching Planet Earth II, and I recommend everybody watch it. But the show has moved further from showing wildlife as it is, and more toward showing wildlife as we want it to be. Like any reality TV show, Planet Earth II often seems removed from reality. (WILSON CRISCIONE) 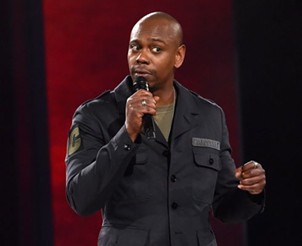 Chappelle is back in action.
I was probably too immature the first time I watched Dave Chappelle’s first stand-up special. Killin’ Them Softly came out well before I was a teenager, and quoting Chappelle Show sketches has been a good barometer for whether or not I can trust you as a person for a decade now. So when Netflix dropped two, hour-plus specials of the reclusive comedy icon on the same day, a marathon was in order. In The Age of Spin and Deep in the Heart of Texas, the 43-year-old comic has filled out a little more of his oversized, button-up uniform, and the years of chain smoking has given a little rasp and gravel to his biting tone. But other than appearances, Chappelle picks up where he left off. Both specials were recorded before 2016’s presidential election, so references are not entirely of-the-moment (Chappelle maneuvers his The Age of Spin set through the structure of the four times he’d met OJ Simpson), but Chappelle is still reflecting on the cultural issues of race, politics, gender and celebrity the way he did in the aughts; he’s still Dave. And Chappelle makes no suggestion that he’s changed since his withdrawal from pop culture notoriety. Despite his non-nuanced perspectives on LGBTQ issues and feminism, Chappelle seems like an old man. But those moments also highlight how the world has changed around him in his seclusion. Chappelle is able to craft two thoughtful hours on what choosing a side is like in this era, and how absolutes are never easy. He masterfully lays cultural bombs and setups throughout, and owning the room with a silence in delivery that leaves you captivated and unprepared for the fallout of every punchline. (TUCK CLARRY)

Fighting insomnia, computerized diagnoses and running to help the hungry