How the Washington state legislature has tried to reduce gun violence 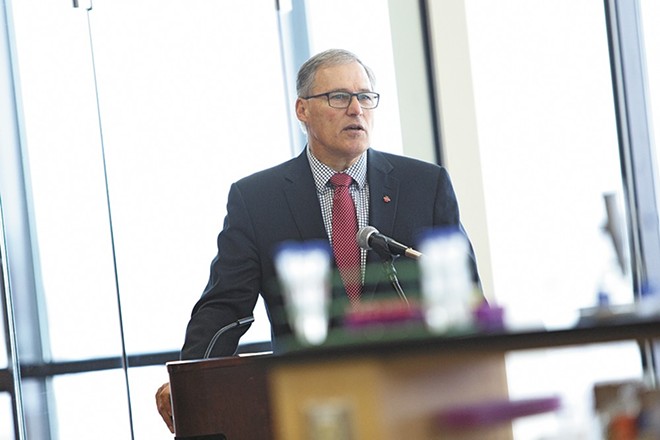 Young Kwak photo
In his 2013 inaugural address, Gov. Jay Inslee referenced the December 2012 Sandy Hook massacre, calling for a solution to gun violence that would likely "involve mental health and keeping guns out of the wrong hands, while respecting the right of my son to hunt and my uncle to defend his home."
Washington state Rep. Laurie Jinkins, a public health official from Tacoma, has spent much of her career talking about gun violence, gun and gun regulations.

But yesterday, contacted by the Inlander in the aftermath of the Freeman High School shooting that killed one student and injured three, she was wary of talking about it all. She wants to be sensitive. Nobody wants to be accused of trying to use tragedy for political gain, especially when the details are still unclear and developing.

So even fervent supporters of restrictions on firearms, like Washington Gov. Jay Inslee, used yesterday to mourn the loss of life, praise the heroism of the students and staff who stood up to the and offer their support for those affected. Few brought up gun control.

But Jinkins is also torn regarding how to react in situations like these. She says she's stopped sending out generic Facebook messages offering "thoughts and prayers" after tragedies like what happened yesterday.

Instead, as chair of the state House's Judiciary Committee, Jinkins has tried to push for measures to prevent gun violence.

"For me, as a policy maker, if I want to make sure more kids don’t die, my focus is mostly to try to do that," she says.

Compared to other states, gun violence is relatively low in Washington — in 2015, we were tied for 14th among states with the lowest firearm mortality rates. But Jinkins and other legislators have been trying to reduce that figure even further.

Just this year, the Washington state legislature passed a bill that requires gun dealers to notify the Washington Association of Sheriffs and Police Chiefs whenever anyone tries to buy a gun and fails a background check, which then goes into a state database. The law also enables the association to start a grant program that lets local law enforcement investigate people who try to buy guns they're not allowed to have.

“This will not just keep guns out of the hands of those who are not eligible to have them, but keep the public and our law enforcement officers safe,” Inslee said.

Jinkins says that Washington has been a national leader on background-check legislation.

"This is an example where the public and voters are way ahead of the legislature," Jinkins says. She says that universal background check legislation repeatedly failed in the legislature, but when activists put it on the ballot in 2014, it passed easily.

"As long as you have the black market where people can buy firearms, the gun checks are only for those of us who are good, honest, law-abiding citizens," he said.

Knezovich, who is generally opposed to gun control, argues that mental health is the best issue to focus on.

“The mental health system, quite frankly in the state of Washington, is broken,” he told KXLY last November, reacting to Inslee's executive order to launch a statewide public health initiative to combat gun violence. "Everything else that I've heard on this issue is just more political rhetoric; quite frankly, every time someone does something like this, my lobby fills up with more people that want to have concealed carry.”

Last November, Washington voters also overwhelmingly approved Initiative 1491, which reflected another bill that hadn't been able to succeed in the legislature. It allowed police officers, family and others to ask a judge to implement an "extreme risk protection order" in order to remove guns from people who are in danger of hurting themselves or others.

Jinkins says the House Judiciary Committee has considered several other gun control measures that have not been able to become law.  The proposed "Safe Storage" bill would have mandated that, if a minor is at home, a gun is locked or stored in a gun safe. While some gun rights activists raise concerns that keeping a gun locked in a safe would prevent you from defending yourself against an intruder, Jinkins disagrees.

“If you want to have a firearm for self-protection, it’s three seconds to get your firearm out of one of those,"  Jinkins says.

The bill made it out but failed to advance out of the House. Another bill would have mandated more in-depth background checks for purchases of military-style semiautomatic weapons and weapons with high capacity clips or magazines. That bill never made it out of committee. Attorney General Bob Ferguson's proposal to ban all rifles with detachable magazines and a pistol grip,  as well as ban high-capacity magazines, went nowhere as well.

Gun control legislation is generally difficult to pass. Proposals face not only political hurdles — gun rights activists typically are more politically focused on the issue than those who support gun control — but constitutional ones as well. In District of Columbia v. Heller (2008), the Supreme Court mandated that the District of Columbia was not allowed to ban handguns.

It passed out of both the House Education and Appropriations but never made it any further.

At this point, it's difficult to know which regulations, if any, could have prevented yesterday's school shooting.

Gun control advocates want to require guns to be locked in gun safes, but according to court documents, the guns that Freeman High School shooter Caleb Sharpe used were in his father's gun safe when he got them — Sharpe knew his dad's combination. Ferguson calls for restricting military-style rifles and high-capacity magazines, but when the AR-15 semiautomatic rifle Sharpe used jammed, he had a pistol as a backup. Washington state voters have pushed for requiring background checks on gun sales, but the Spokesman-Review says that Sharpe's father is the individual who buys him guns. Parker's legislation would have enabled students to anonymously report concerns about violence, but students did go to a counselor when Sharpe handed them suicide notes.

These sorts of issues are often raised by gun rights activists, who complain that citing mass shootings to push for legislation that wouldn't have stopped those shootings, or lessened the impact of those shootings, is cynical.

But Jinkins argues that the goal isn't about having policies that could have prevented one specific shooting, but policies to reduce gun violence — including suicide — overall.

"With many really intractable problems, there’s not a single magical solution. There’s a whole series of things you have to address," Jinkins says.  "It’s just like how we’ve driven down the number of people who die in motor vehicle accidents."

Motor vehicles weren't banned, but laws and regulations around seat belts, roads and airbags have resulted in far fewer deaths.

Mike Padden, chair of the Senate Law and Justice Committee, said in a statement that today is not the time to talk about policy.

“This is a time for us to put politics and other worldly concerns aside, and show our support for Freeman students, parents and staff. Our community has been through a great trauma.

“Let us pray for the Freeman families whose sons and daughters were in the line of fire, and for the many students who will be haunted for the rest of their lives. We stand with them. Today we are all Freeman Scotties.”

The Freeman school takes discussions of gun violence, out of the policy realm for the legislature, and into the deeply personal. One Spokane-area legislative aide, asked to remain anonymous, in part to protect his children's privacy, says his two kids go to Freeman. One kid had a class with the shooter. The other was close enough to see and hear the shooting.

"This is going to haunt those students who were there for the rest of his lives," he adds.

During her time on the Judiciary Committee, Jinkins has heard the testimony of many victims of gun violence, including former Arizona U.S. Rep. Gabrielle Giffords, who survived a 2011 mass shooting in Tucson by a gunman who was attempting to assassinate her.

"I do want to hear victims," Jinkins says.

She just wants there to stop being so many.