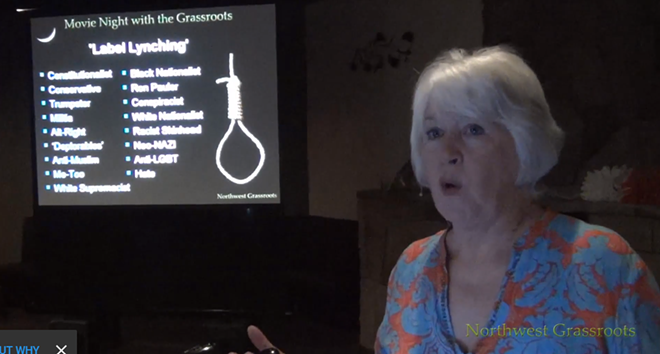 But in July, she welcomed him with open arms. She argued he had been the victim of unfair media labeling.

Can you imagine, she told the Inlander, in June, if somebody came to one of her conservative Northwest Grassroots movie nights and started saying racist things?

But when Wright introduced Allsup at the Northwest Grassroots Movie night on July 11, Allsup wasn't pummeled. He was applauded.

"I have a gentleman here, who has been label-lynched," Wright says. “People's lives are destroyed with the labels that are being hung on them. Because, we don't take time to figure out, is it true or is it not true?"

But in Allsup’s speech, he argued that the media had unfairly portrayed him as a racist. He celebrates Corey Lewandowski’s “ ” dismissal of the suffering of migrant children. He condemns Paul Ryan as a “swamp creature” and a globalist. He tells people not to trust the media. And he calls for doubling-down when people ask him or other conservative to apologize for controversial statements.

After a coalition of groups released a statement condemning Wright's decision to host Allsup, Wright issued a statement.

"This was a serious mistake in my judgment,” Wright stated, suggesting it was a lesson in the need to "more thoroughly research individuals before giving them a platform to speak."

She claimed her husband had invited Allsup to speak at the grassroots meeting without her "knowledge or consent." She denied that she had praised Allsup, stressed her past opposition to racism and claimed Allsup was there to "denounce the vile, racist views he is associated with."

But in the video, she can be heard thanking Allsup and telling him, “I really appreciate you.”

“How’d you like to have a couple hundred more people like James in Spokane?” Wright’s husband John Charleston can be heard asking toward the end of the video. The crowd applauds. “Let’s make some stuff happen, and this is the start of it.”

(In an email to the Inlander, Allsup scoffs at the suggestion that he was ever expected to disavow his views. Allsup forwards what appear to be screencaps of emails where Charleston discusses the plan to have Wright introduce Allsup and asks Allsup to praise Northwest Grassroots for not believing the media's rhetoric.)

I
n response to the Spokane GOP chair’s decision to give Allsup a platform, a coalition of groups in Spokane called for local organizations to rally in front of the courthouse to unite the Spokane community against white nationalism on Thursday at 5:30 pm.

Jac Archer, the vice-chair of the Spokane County Democrats and a member of  Community Against Racism, points out how offensive even Wright's use of the term "label-lynching" is.

"Lynching historically refers to the extrajudicial torture and murder of people of color and other marginalized groups of people in the United States by a white supremacist and a white nationalist majority," Archer says. "To co-opt that phrase on behalf of the ideological descendants of that same majority is utterly disgusting."

Lindsay Schubiner, program director for the initiative focused on countering white nationalism, for the Western States Center, says that Allsup's strategy is to embed himself in the GOP.

Schubiner says that, lately, Identity Evropa has tried to obscure their white-supremacist goals.

"They think that if they moderate their language, really only slightly, that will be enough to confuse people and prevent them from being broadly understood as the white nationalists they are," Schubiner says. "Republican leaders need to do more than offer statements. They do need to condemn white nationalists. They also need to take explicit actions to remove white nationalists from positions of influence within their party."

“It shows an extreme lack of judgment,” Baumgartner says of Wright’s decision. “One that the PCOs who determine the chair need to take a strong look at."

He offers an explicit denunciation of Allsup, as an American, a Republican and a WSU alum.

"When he first came on the screen, I remember thinking, at best he was some sort of immature provocateur, at worst he was a troubling racist trying to exploit the openness of the Republican Party in this state."

He noted that there's a respected precedent for Republicans to oust uglier elements from their party, noting that National Review founder William F. Buckley fought to eject the John Birch Society from the Republican Party.

He says he'd be happy to speak at the rally against white nationalism.

"She believes white supremacy has no place anywhere in America and that we must come together as fellow human beings to end bigotry and violence," Powell says. "She was not in any way affiliated with the event in this video and is disappointed anyone would give a microphone to James to amplify his hateful view."

So is it "label-lynching'" to call Allsup a white supremacist or a white nationalist?


"The test gap exists because black and white IQs are different,” Allsup wrote on before his account was suspended. was more than color, he argued, it was “ and physiology.”

But maybe the most-clear examples of Allsup's white supremacist views come from his appearances on alt-right podcasts.

Just a week after McMorris Rodgers disavowed him, Allsup

proudly proclaimed that he’s the first elected official to come on the Daily Shoah, a podcast aligned with the white supremacist Daily Stormer website.

Across a two and a half hour podcast, Allsup repeatedly lays out his white-supremacist views.

white 'conservatives,' whose only identity is comprised of vague, abstract 'values,' and who are participating in the displacement of European Americans." Basically, failing to defend white identity politics is, in the mind of the alt-right, tantamount to letting an outside party have sex with your wife.)


"They're not going to get away with throwing their base under the bus any longer," Allsup says, noting how social media trolls and "rural decent white people" who swarmed McMorris Rodgers' Facebook page to criticize her for disavowing Allsup.

"I just doubled-down and went to Facebook," Allsup said. "We actually started winning. The articles dried off. The more press they were giving the issue, the worse it was looking for the establishment GOP."

On the podcast, he encourages alt-right allies to mock Republican disavowal statements as virtue signaling. He makes fun of the local GOP leaders scrambling to figure out how to respond to his Precinct Committee Officer election earlier this year.

"One of the possible responses to my election was to host a Holocaust survivor dinner!" he says cracking up.

It sparks a long conversation with the hosts about the power of Jewish people and their influence on politics. He riffs along with one of the Daily Shoah hosts who mock McMorris Rodgers' "Cathy Represents Us" campaigns for including "fat black women, skinny Asian women, all these women of different races and different life," calling it "shit-tier, feminist, liberal shit."

The hosts call Heather Heyer — killed by a white supremacist during the Charlottesville rally — "a fat bitch who smoked menthols" who "started a riot to prevent people's free speech"  and Allsup scoffs at the way that media outlets keep referencing her death in every article about Charlottesville.

Allsup and the co-hosts laugh at a Daily Shoah segment joking about the "Jew York Times," and using slurs like "kike," "crack head n—-ers," "yid bitch" and "faggots."

"Everyone is more right-wing in private," one of the Daily Shoah co-hosts notes, "than they are in public."

"Often times you get control over which candidates get money," Allsup says. "You can block funding to the anti-white, pro-migrant candidate."