A year of cops and pot. A war ends and an occupation begins. And one bad bomb.

Last year ended with a spate of shootings by local law enforcement that left four people dead. But it was a death that occurred five years ago that ruled the conversation about policing this year.

Otto Zehm died in 2006 after being violently confronted by Spokane Police Officer Karl Thompson. The long-awaited, long-delayed trial of Thompson finally took place this fall, when he was convicted of lying to investigators and using excessive force against Zehm. 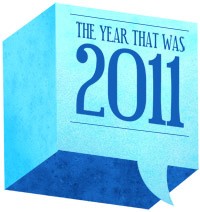 But even before the trial, changes to the police department began to take place. The chief and her top assistant announced their retirements, clearing the way for new leadership. The state Supreme Court made a ruling that affected the department’s tight-gripped control of internal records. (Another ruling by a state labor expert stripped the police ombudsman of some of his powers, but city leaders are working to re-establish them.)

After the Thompson verdict, Mayor Mary Verner invited the U.S. Justice Department to investigate the police. Then she was voted out of office and replaced by David Condon, who ran, in part, on reforming the department. He has since said it is his top priority.

Looking back, it could be said that 2011 was the year that the police department began its long march back to earning the trust of the public. But 2012 will have to be the year it happens. (Nicholas Deshais)

The Fall of Mary Verner

There were a few signs this year that Mary Verner would be the first Spokane mayor re-elected since the 1970s.

First, rumors of potential challengers swirled but were quickly dismissed. As the deadline to register for the race approached, there still were no serious challengers. Then David Condon appeared. Despite being a senior aide to U.S. Rep. Cathy McMorris Rodgers, Condon’s name didn’t really appear on most people’s radars.

Then came the primary election. Five names were on the ballot for mayor, but only two remained after the vote: Verner and Condon. And it was a blowout for Verner. She took in about twice as many votes as Condon, and many began wondering if it were true: Would Verner be a two-term mayor?

As autumn arrived, Condon kept ringing doorbells and raising money (including, notably, a giant infusion of cash from the state GOP). Verner, on the other hand, had to deal with the trial and guilty verdicts of Spokane Police Officer Karl Thompson.

Six days after the trial’s end, ballots were due. Condon won.

Many say Condon is the beneficiary of Verner’s mishandling of the Zehm case. But only time will tell if he becomes the first mayor — since before he was even born — to serve a second term in Spokane City Hall. (ND)

A year that began with conflict over medical marijuana dispensaries ends with a full-fledged effort to get the drug completely legalized.

What a year for marijuana. When the Legislature convened at the beginning this year, a quiet effort took shape to codify within the law the many dispensaries that had popped up around the state, including the 40 estimated to have been in Spokane County. By the end of the session, a bipartisan group of legislators had cobbled together a deal to make the dispensaries legal, to regulate and tax them, and to keep their advertisements reined in.

Then Gov. Chris Gregoire gutted the bill by vetoing most of it. Then eastern Washington’s U.S. attorney, Michael Ormsby, ordered the raids of local dispensaries, which was followed by similar raids across the nation.

A couple of months later, a coalition of law enforcement and health professionals called New Approach Washington announced its intention to completely legalize the drug — which they estimate would bring in more than $200 million

in yearly revenue for the state. This week, the group handed in about 300,000 signatures to the state’s elections division, assuring that voters will be considering the measure this November.

And on top of all that, the governor recently sent a note to the U.S. Drug Enforcement Administration asking it to reclassify and decriminalize the use and possession of marijuana.

It’s a year some people may break out the bubbly for. (ND)

This year, silver prices fluctuated between $30 and $50 an ounce, and mining company Hecla won approval to drill a new 8,800-foot shaft at the shuttered Lucky Friday mine in Mullan, Idaho.

Yet 2011 will probably be better remembered for three accidents that took place at the mine, which cost the lives of two miners.

In April, Larry Marek, an employee of Hecla for 12 years, was crushed by a collapsing rock shelf in the mine.

An investigation by the U.S. Mine Safety and Health Administration, released in December, faulted Hecla for removing a pillar that the report says would have prevented the collapse.

In November, Brandon Gray, a contract miner with Cementation U.S.A., was killed after being engulfed by waste rocks.

And in December, an explosion of rocks deep underground injured seven miners and again halted production at Lucky Friday.

A week later, Hecla announced that it would bypass the area affected by the burst and would meet its 9-million-ounce production quota for the year. (Chris Stein)

Slashing the budget has been a recurring theme for Washington state legislators in the past few years, and this go-around was no exception. Just when lawmakers thought they had the budget sorted, when the regular session ended in May, the state’s Office of Financial Management predicted a $1.4 billion revenue shortfall.

And so the Legislature reconvened in Olympia for a special session in November and agreed to cut about $500 million from the budget.

Many social services programs that helped homeless people, foster children and people with disabilities, among other programs.

Expect further cuts when the Legislature reconvenes in January. (CS)

Kevin Harpham’s attempt to detonate a bomb on the route of the annual Martin Luther King Jr. Unity Parade in Spokane last January was an unpleasant reminder of the Inland Northwest’s racist history.

Harpham, a resident of Addy, Wash., was arrested in March, and it quickly became apparent that his targeting a parade in honor of the civil rights hero was no accident.

He had repeatedly posted on a white supremacist website about his desire to lash out at the world. And he seemed to have taken several months to plan, build and test the bomb, which would have sent rat-poison-covered fishing weights across the intersection of Main Avenue and Washington Street in downtown Spokane.

The whole affair was over by December: Harpham took a plea agreement, and judge, disappointed at his lack of remorse, sentenced him to 32 years in prison, the maximum allowable under the agreement. (CS)

You’ve heard the tale: Protesters take over a park in Lower Manhattan and call it Occupy Wall Street. Similar encampments spring up all over, from major cities to forgettable suburbs. They last for a week or a month or two months, until the city administration gets tired of them and sends in the cops to clear them out.

That's how it ended in Los Angeles, Seattle and Oakland, but not in Spokane.

Yes, they made the occupiers take down their tents when they first showed up in September, but they also worked with the protesters to get permits for a portable kitchen and a short-lived occupation of Franklin Park. The occupiers’ marches against the banking industry were peaceful and unhindered by police. And unlike in larger cities, Spokane’s occupiers have seen their numbers dwindle naturally — with time and the cold weather. (CS)

The War in Iraq Ends

The nine-year war in Iraq officially ended this year, but there wasn’t much ticker tape. It ended neither with the nationalistic cheerleading that began it, nor the protest and pessimism that dominated the darker middle years.

No weapons of mass destructions were ever found. A dictator who filled mass graves with his own citizens was replaced by democracy, however ramshackle. Nearly 4,500 American soldiers died in Iraq — and thousands more committed suicide back home. The exact death toll for Iraqi civilians is unknown, but some estimate it to be 100,000.

As many soldiers returned home from Iraq, some found themselves quickly assigned back to Afghanistan. (Daniel Walters)

You can trace this year’s elimination of Don’t Ask, Don’t Tell — the rule banning gays from serving openly in the U.S. military — back to Margaret Witt, a flight nurse (who-happened-to-be-a-lesbian) from Spokane. She was kicked out long before she admitted her sexuality, and her ensuing lawsuit impacted larger court rulings and eventually helped persuade Congress to eliminate the law.

Yet, this year, several gay Spokanites felt they were victims of discrimination. Several young transgender bus riders were kicked off the bus for discussing bisexuality (the Spokane Transit Authority later apologized). And several gay men in Spokane were assaulted. While the police weren’t ready to call the latter hate crimes — categorizing them as typical assaults — the men believed it was because of their sexuality. Members of the police department met with gay community organizations, where police Chief Anne Kirkpatrick apologized to one of the gay men who said he was treated poorly by police officers. (DW)