The second ever Spokane Arts Month kicked off with two of its biggest events — Terrain and the Visual Arts Tour — last weekend, but that doesn't mean things are dying down. Here's a roundup of artsy things to see, hear and do this weekend:

Legends and Landmarks
Check out the newest murals brightening up two of downtown Spokane's many train overpasses, and joining the four murals installed last summer. The two newest additions are at the Post Street underpass, between First and Second Avenues, by Justin Gibbens, an Ellensburg-based artist. The second is along Railroad Alley near Barrister Winery, and was created by Karl Addison, of Bremerton, Washington. You can check out the completed murals anytime.

Spokane Throw
Another sight to see that doesn't require much planning ahead, as it's being displayed all month each night, is the second annual Spokane Throw light installation on the side of River Park Square. The community arts project accepted submissions of handwritten, 25-words-or-less letters and is projecting one of them onto the side of the mall after dark through Oct. 31. Tonight, the Garland District is also unveiling a second Spokane Throw letter, to be projected on the side of the Spokanite Cleaners building at 718 W. Garland. After tonight, you can see that light projection daily after dark, too.

SpoYo! Spokane Youth Book Festival
The kid sibling of Get Lit!, spring's annual literature festival organized by Eastern Washington University, the new SpoYo! fest is aimed at kids who love to read or are just developing an appreciation for books. The first-time event's slate of guest authors is pretty impressive. Along with many of the Northwest's own children's and YA writers, SpoYo! has snagged the author of the popular Bad Kitty series, Nick Bruel, and Amulet graphic novel creator Kazu Kibuishi. The keynote author presentation at the Bing this Saturday evening caps off a day of workshops and features S.E. Grove, who wrote the middle-grade bestseller, The Glass Sentence. 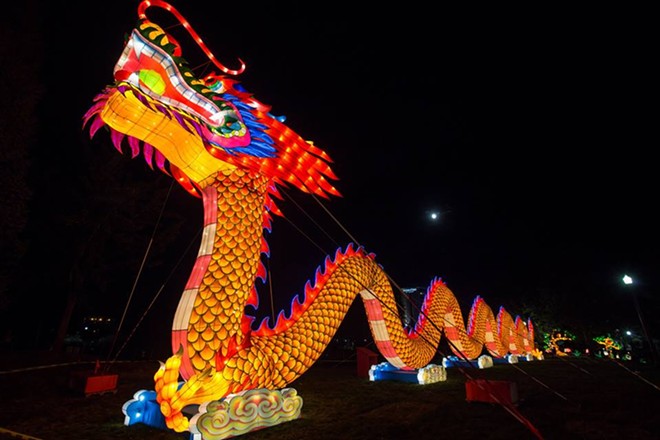 Washington State Chinese Lantern Facebook
The centerpiece of the festival is the 196-foot dragon in the center of the park.

Washington State Chinese Lantern Festival
The five-week festival of light and color continues in Riverfront Park. If you've been tempted by the glowing orbs seen from outside the festival boundaries, don't miss a chance to see it up close. It's easy to put off longer-running events like this, thinking you'll eventually get to it, but we urge you not to have that mindset. Aside from the breathtaking lanterns, the festival includes nightly performances of traditional Chinese dance, music and acrobatics. There's also park food vendors inside, but the real treat is at the festival's pop-up restaurant, Deng Chu (which translates from Chinese to "Lantern Kitchen") headed by award-winning Spokane Chef, Jeremy Hansen, best known for his flagship restaurant, Sante. This week's featured regional cuisine of China comes from the Shandong region, rich in seafood dishes. Read all about the festival in our feature.

Bartfest
Kicking off last night with two bands and the Bartfest poster show, the second annual weekend music festival at the Bartlett is happening tonight and tomorrow, with tickets still available for purchase at $20/night. That price gets you admission to both the Bartlett and nYne Bar next door, each hosting four bands both tonight and tomorrow. Read more about this year's line-up in this week's music section, and don't wait to get tickets if you think you want to check it out.

Other Desert Cities / Catch Me if You Can Local theater season is in full swing, and tonight is the last weekend to catch the Modern Theater Spokane's well-received opening show, Other Desert Cities. Check out our review of the play, which was nominated for the Pulitzer Prize in 2011. Also, two weekends are still left (it closes on Sunday, Oct. 18) for the Spokane Civic Theatre's season opener, a musical version of Catch Me if You Can, a story popularized when the Leonardo DiCaprio-starring film came out in 2002. The glitzy 1960s-set show boasts colorful, poppy costumes and swinging, big band music. But the real draw of the show is the ironic on-stage charisma of conman Frank Abagnale, Jr. (Cody Bray) and the FBI agent tasked with catching him, Carl Hanratty (Mike Haynes).

Verbatim
A second edition of this artist + writer collaboration is back for Spokane Arts Month. The concept pairs seven writers with seven artists, who've combined their creative talents to create a gallery piece and a performance. The artwork is to be auctioned off as a benefit for Spark Center and INK Art Space's educational programs in arts and literacy. See the pieces this Saturday at the Marmot Art Space in Kendall Yards, and then catch each duo's performances at INK/Spark around the corner, at 7 pm.

This list seems exhaustive, but there's actually much more going on just this weekend, including the Spokane Symphony's next Classics Series concert, focusing on American composers, a new multi-artist exhibition at the Spokane Art School curated by artist Kay O'Rourke, and, of course, many gallery shows that debuted last week remain open. You'll be hard-pressed to try and see and do it all.

THIS WEEKEND (AND BEYOND) IN MUSIC: Bartfest schedule, Never Young and Flying Spiders CD release