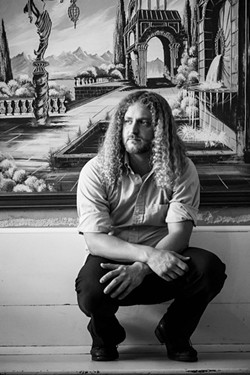 FRIDAY
Local singer-songwriter Andy Rumsey finally releases his first solo album tonight. He was never quite sure this thing would make it out to the rest of the world, and tonight, it’s all happening. Other local acts on the bill include B Radicals, 3H Band and Flannel Math Animal. The show is sure to leave you feeling warm and fuzzy. Cost is $8 at the door, or $18 with CD. Show starts at 7 pm. Read our story on Rumsey right here.

For country folks, the Nashville North is celebrating its one-year anniversary this weekend. The Stateline venue brings in a bunch of co-owner/Nashville recording artist Jeremy McComb’s friends including: Steve Starkey, Luke Jaxon, Jake Barr and Kenny Sugar. Show up early and admission is greatly reduced, you may even be able to learn some line dancing. Yee haw!

Peter Rivera, the drummer for the band Rare Earth who moved to the Spokane area a couple years ago, is doing his solo thing tonight at the Chateau Rive. Expect the evening to be full of surprises. Cost is $20 at the door and the show starts at 8 pm .

SATURDAY
The Round is happening for the 12th time in Spokane. The Bartlett has quietly hosted these events for a year, which feature local singer-songwriters, poets and visual artists. This latest installment features musicians Courtney Marie Andrews as well as Kent Ueland and John Merrell. Read our story about the event right here.

SUNDAY
Yes, Queensrÿche is still alive and kicking. The band may have had their biggest hits in the 80s and 90s, but they’re still putting out new material — even with a new lead singer (who still sounds just as good). The Northern Quest show starts at 7:30 pm with tickets starting at $45.

Joan Armatrading did some big things on MTV, back when they used to play music videos. She was one of the first solo black female featured on the channel. With a career spanning 40 years, the British artist has continued to be herself. Sunday, she comes through the Bing Theater as part of her final world tour. Tickets start at $29. The show begins at 8 pm. Read our story on Armatrading here.

Nurse abused mental health patients and retaliated against employees when they reported it, lawsuit claims

Still time to swing it: Your guide to fall golf in Spokane