In this year's "Spokane Style" section of our reader-driven "Best Of" poll, the clear winner for "Best Bumper Sticker Seen Locally" was "Spokane Doesn't Suck."

No, this wasn't a bunch of voters being sarcastic. It's an actual bumper sticker. Spokane Doesn't Suck is a Tumblr-blog-turned-$10,000 Kickstarter from local designer Derrick Oliver. At SpokaneDoesntSuck.com he sells sweatshirts, T-shirts, mugs and stickers emblazoned with the message that "Spokane Doesn't Suck."

But this got me thinking: There's a whole untapped market out there for other expressions of civic pride, civic tolerance. So this weekend, borrowing some from the vintage Spokane prints designed by the Inlander's Chris Bovey, I whipped up a few alternative posters with messages ranging from grudging acceptance of Spokane to hypnotic, hyperbolic love.

Visit Spokane is welcome to contact me about using these for future ad campaigns if they choose.

This poster takes a simple self-conception — the conventional wisdom that "everyone knows" — and dares to inject an element of possibility into it. Maybe what everyone knows is incorrect. Maybe they're wrong and you're right. Maybe Custer never died at the Battle of Little Bighorn. Maybe love can transcend the impossible. Maybe Spokane doesn't suck.

Remember, every great invention starts with a bold presupposition. 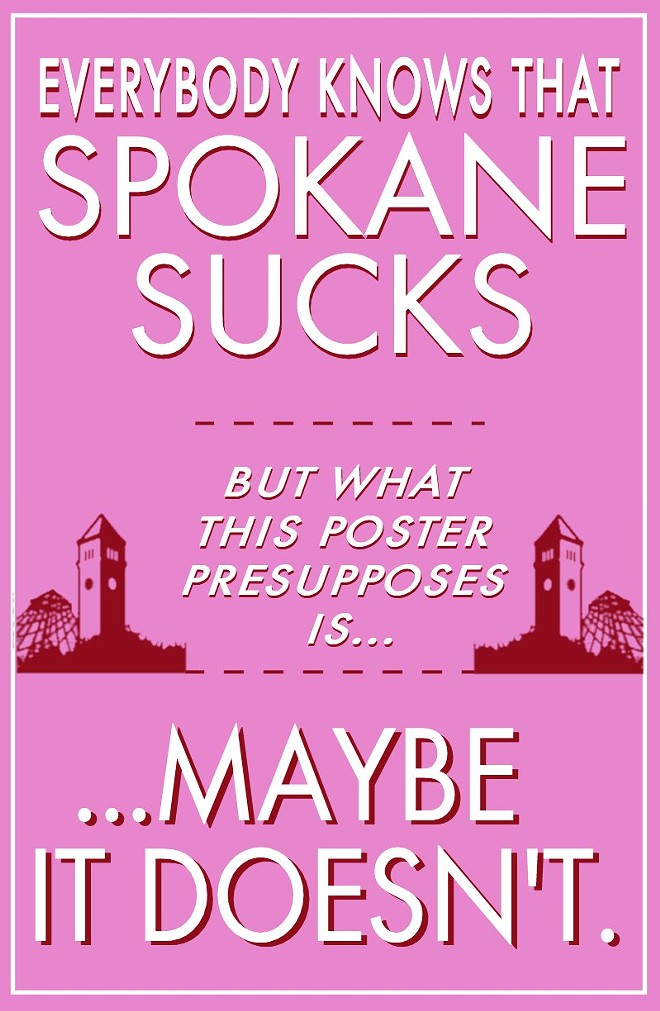 2. What Gets Our Goat

Okay, so maybe Spokane doesn't suck. But one of the best things about Spokane Sister Paula Turnbull's Riverfront Park sculpture of a garbage-eating goat. Press a button and it will devour your trash, your litter, your regrets, your anxieties, your self-doubt and your most traumatic memories, leaving you a more enlightened, unburdened soul. 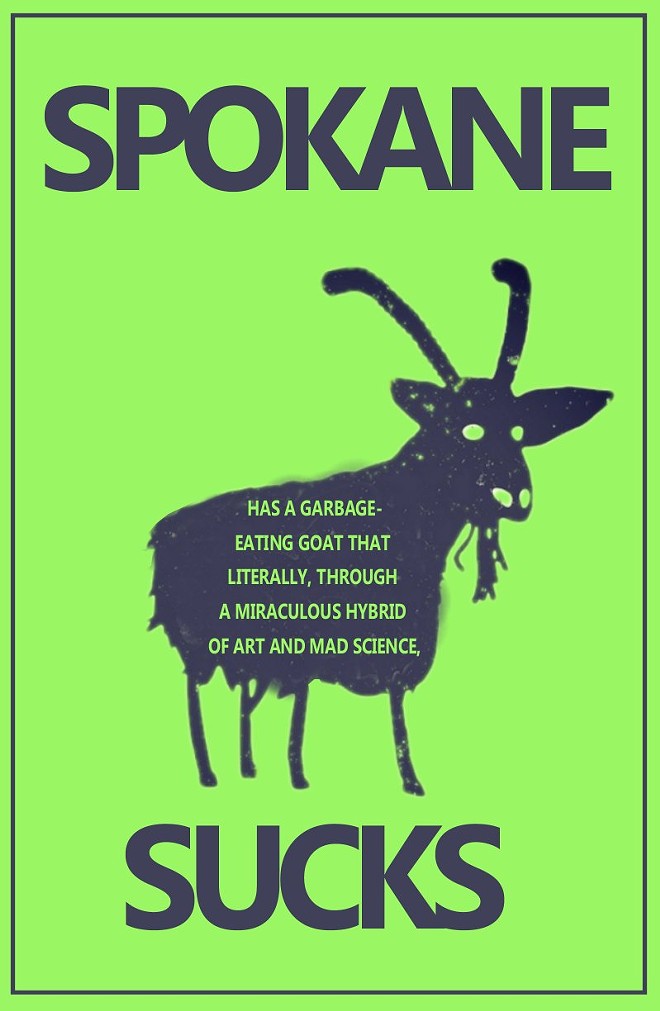 3. The Most OK city west of Oklahoma!

You've been here long enough. Your bitterness about the move has begun to fade. You've gone through grief stages one through five, and you've arrived at acceptance.

Maybe the city is growing on you. Maybe it's just Stockholm Syndrome. But hey, Stockholm's a pretty great city in its own right. Like Spokane, it's not such a bad place to live either. 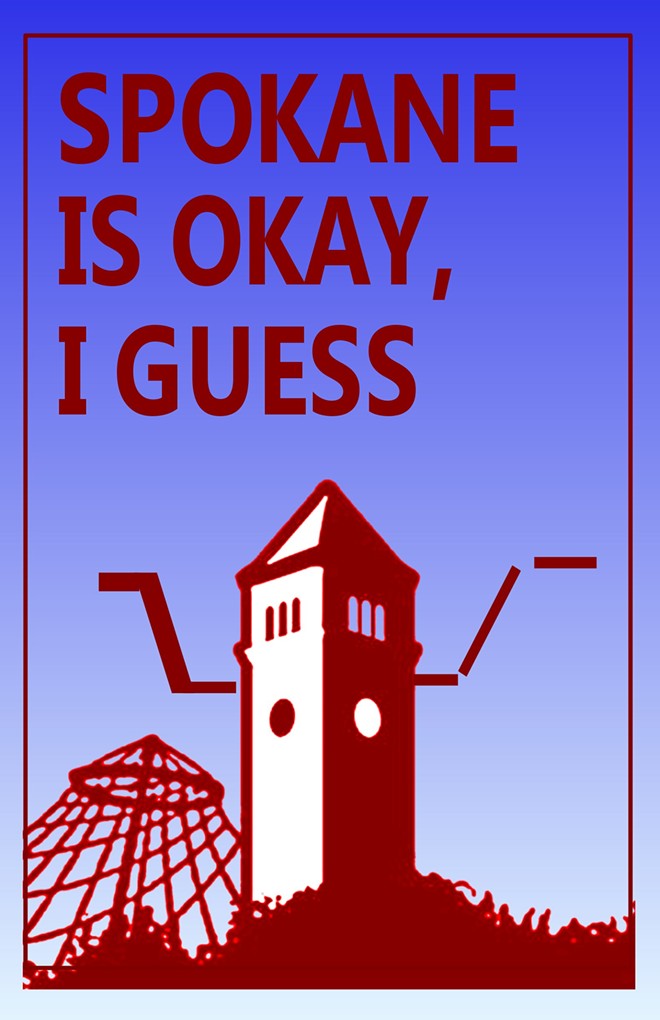 What's done is done. Spokane is what it is. Whatever happens, happens. Your life in Spokane isn't over until it's over. So stop trying to change Spokane, and just let Spokane be Spokane. 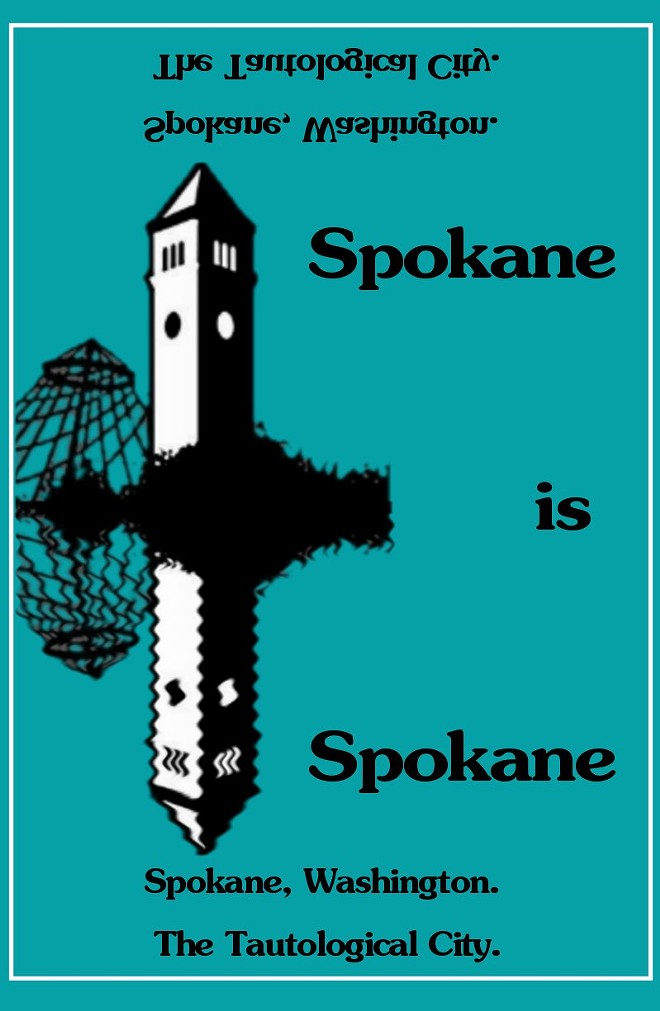 Let's put all our cards on the table: Spokane, from its snow-capped mountains majesty to its purple waves of lilacs to its patriotic alt-weekly is the best city there is, or was, or may be.  If the city asked you to kill for it — of the greater good, of course — well, you'd have to think about it. Maybe pass the time by playing a little solitaire first. 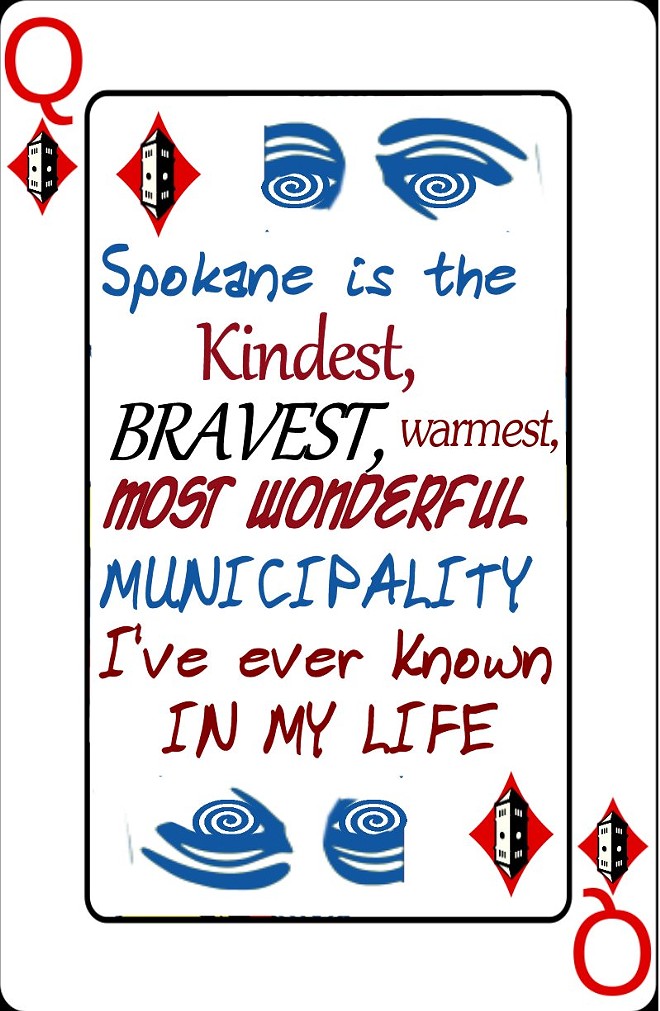 6. Actually....
The situation's a lot more nuanced than that. You think you can sum up such a complicated system as a city of over 200,000 with three words on a single poster? Hardly. The whole of a city is an irreducible writhing mass of personality and possibility. You can attempt to fathom  it — but to describe it is to rob it of its beauty. Nothing is purely good or bad. Not unlike a cursed doll that comes with a free frozen yogurt, you must take a city with the good and the bad. In other words: If you can't handle me at my Robert Lee Yates, you can't have me at my Craig T. Nelson. 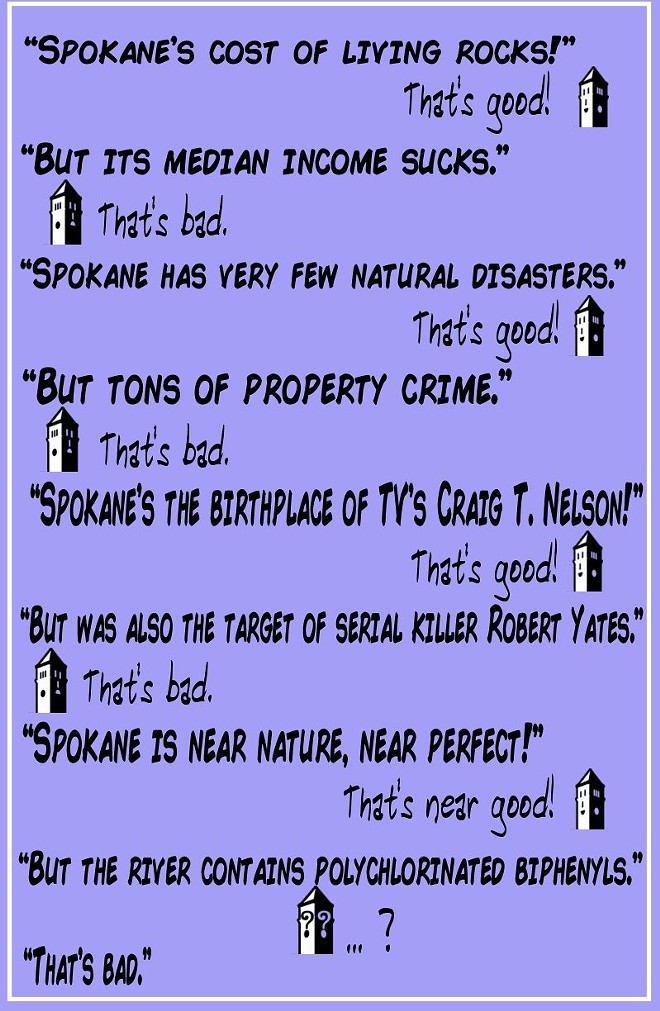