In August, Stuckart suggested "recall" as consequence for mayor not submitting Meidl for council approval 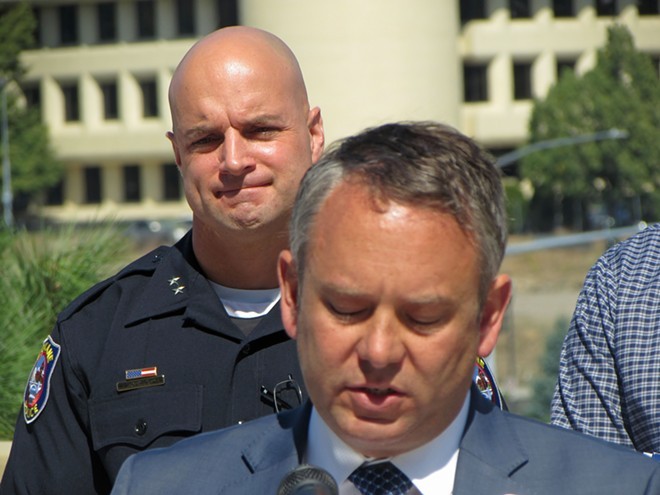 Daniel Walters photo
Things may be smooth now, but records reveal new insights into the turmoil frothing around the Craig Meidl appointment back in August
Records requests, at times, can be like time capsules from a different era. So sure, now things are pretty chummy — the council passed the mayor's budget quickly and unanimously on Monday.

But back at the beginning of August?

Well, that was a different, more chaotic time. A trove of emails obtained by the Inlander last week centered on the days leading up to Police Chief Craig Meidl's initial appointment, illuminate a few interesting things:

1. City Council President Ben Stuckart suggested a "recall" was the proper consequence if the mayor refused to seek confirmation from the city council.

It's important to consider just how tense things were back then: Meidl's initial appointment had come less than a week after the controversial report had been released about how the mayor had handled issues surrounding the previous police chief, Frank Straub. The report concluded that Mayor David Condon's administration had intentionally withheld documents about sexual harassment allegations about the chief until after the 2015 election. Condon fervently denied this.

The sudden appointment of Asst. Chief Craig Meidl, which bypassed the lengthy process other police chief candidates had gone through, tossed fuel on that fire. In particular, the mayor suggested he would not be seeking city council confirmation. At least not at first.

"Unfortunately, I made the difficult decision to not bring Chief Meidl for confirmation at this time out of an abundance of caution and concern for him and his career," Condon wrote in a statement to council shortly after. While he maintained he would eventually seek council approval, he did not lay out a timetable.

Stuckart saw this as a flagrant violation of the city charter.

"The mayor just made the difficult decision to break the law," wrote in an email to Council Legal Advisor Brian McClatchey and the Center for Justice's Rick Eichstaedt, who was involved with representing the group that an ethics complaint against Condon.

"This is illegal," he wrote to his fellow councilmembers.

"Brian is working on what the penalty for this would be," Councilwoman Lori Kinnear replied.

And then wrote back with one word:

Indeed, when accountant David Green filed his recall petition two weeks later, he included the charge that Condon was breaking the city charter by saying he refused to bring Meidl for council confirmation.

Publicly, Stuckart — who has filed to run for mayor when Condon's term runs out — had distanced himself from commenting on the recall, though the mayor raised vague accusations that the recall had been coordinated.

In a Facebook message, Green assures me that Stuckart was not in contact with him over this issue.


I added the Meidl charge to the petition because it seemed to be a clear violation on the charter based on articles in the news media. Nobody suggested that I do so (particularly because nobody was aware I was working on the recall petition).

Ultimately, a judge determined that the city charter was too vague on when the mayor should bring his appointments before the council to use his hesitation to suggest a recall.

Today, Stuckart says that he doesn't remember who he else he might have sent his "recall" comment to, but stands by his analysis.

"It's a recallable offense! If he would have held and never brought Meidl forward, that's against the charter and the municipal code," Stuckart says. "On that day, I was pretty much like, if he's going to refuse to bring it? I saw the press conference. I saw the answer. And then I got calls that day from media outlets going 'What the f—- is going on?'"

Asked if he would have led a recall effort if the mayor had continued to refuse to bring Meidl before the council, Stuckart says the council moved in a different direction instead, deciding to vote on Meidl's confirmation with or without the mayor.

And when it looked as if Meidl didn't have enough support, a last-minute deal was worked out: Other police chief candidates were brought back to compete against Meidl. Council voted 5-1 to confirm Meidl, complete with a glowing endorsement from Stuckart. (Councilwoman Karen Stratton opposed it.)

2. Before picking Meidl, Condon was in a lose-lose situation when faced with choosing between the two finalists.

Before suddenly deciding to pick Meidl, a police search from an outside firm and a selection committee had winnowed down the police chief choices to two finalists: Elk Grove, California, Police Chief Robert Lehner and Yakima Police Chief Dominic Rizzi Jr.

Four different interview panels assessed the two finalists.  While the Spokesman-Review reported that panelists were "generally impressed" with the Rizzi and Lehner, the records obtained by the Inlander showed some major asterisks with those two finalists, in some cases literally.

In particular, Stuckart opposed both candidates.

KXLY reported in July that Stuckart said that "both candidates could be the right man for the job, but the city council says they should have the chance to choose from more options."

"Lehner and Rizzi are not the right choices," Stuckart wrote. "I would not hire either of them. Neither have the dynamism to lead the SPD."

I called up Stuckart for elaboration.

"They were both nice guys, but neither were dynamic. Lehner was very academic. Felt to me like a college lecturer. Rizzi just didn't give examples and made some missteps," Stuckart explains. "The second round of interviews I was much more impressed with Rizzi."

And Stuckart's view wasn't the only complicating factor.

Gloria Ochoa-Bruck, Condon's director of multicultural affairs, starred Rizzi's name and wrote not recommended. So did city public defender Francis Adewale, who wrote that Rizzi was "not suitable for our city."

So Condon was faced with a few options:  Vote for Lehner, thereby defying the recommendation for most of the interview panels, not to mention the assistant chief. Or vote for Rizzi, thereby appearing to ignore the explicit red flags thrown up by several community leaders.

Or find somebody else.

3. Meidl's appointment caught even those closest to him off guard.

Even Meidl's own assistant, Angie Napolitano, seemed surprised by the appointment.

"Well, it looks like we would have both lost that bet this morning!" she wrote to City Councilwoman Kinnear. "I sincerely had no idea."

Just five days before Meidl's appointment, his wife, then-Capt. Tracie Meidl, emailed the Inlander responding to a request for an interview, saying, "I will be out of town and come back to work Tuesday." That changed, of course, when her husband was appointed police chief that Monday.

Michele Anderson, safety division spokeswoman, says she only found out three days before it was announced. In fact, the first internal emails discussing Meidl's appointment turned up by the Inlander's records request were from the night before the announcement, as Anderson was prepping Meidl for possible press questions for the ceremony.

She prepped him for a lot, in particular concentrating on how to respond to the controversial salute of (and email in support) of convicted officer Karl Thompson. She wrote in an email with City Spokesman Brian Coddington that she'd spoken with Meidl about details about stagecraft for the ceremony:


"I did speak to him about the badge pinning, and his daughter is happy to participate. I explained to him that the Mayor would start off, pass to him, and then the Mayor would make it seem not so staged by having his family come up and 'make it official.'"

But her media briefing documents don't allude to the question of council confirmation, which ultimately became the biggest controversy.

That's not to say that the Thompson baggage didn't have an impact. Just minutes after the city sent out its press release about the Meidl pick, Mary Ann Murphy, who had resigned in March as chair of the mayor's committee developing recommendations for picking the next police chief, sent Stuckart an email with a single word: "OUTRAGEOUS!"


Dear Members of the City Council, I just received an email from the Mayor that says he intends to choose Craig Meidl as Spokane's next police chief.

With this action to promote not only a person who saluted a convicted felon, Karl Thompson, in a court of law, but the ranking officer at the time.

This completely shreds the efforts of the Police Leadership Advisory Committee.

4. The announcement of Meidl as police chief spurred a lot of immediate praise

While Meidl's appointment sparked some outrage from critics like Murphy, it's also notable the wide range of praise the pick immediately garnered. Just a few examples:

• Bob West, vice-chair of the Spokane County Sheriff's Citizen Advisory/Review Board
"So excited for you and family. Definitely a win for Spokane! Please let me know if there is ever anything I can do to assist you."

• John Lemus, chair of the Spokane Human Rights Commission
"If Chief Meidl had been one of the folks that the different panels got to interview I would have voted for him in a heartbeat! He's done so much to bring the department to the community and build trust!"

• Andrew Wicks, director of project
"Wishing you well in your new appointment!  I think we got it right this time :)"

• Former police guild President Ernie Wuthrich
"What a nice surprise! I hope you get to stay on as our chief till you’re old and gray! I look forward to continuing to work you."

• NAACP chair Phil Tyler:
"Congrats on the new job...but shouldn't it say Chief. Can't wait for the big changes you will make for our department my friend."

• Pastor Shon Davis, and police-reform advocate, in a letter to Condon:


I am sending you a personal letter to commend you in your announcement today to appoint Craig Meidl as the new police chief of the spokane police department. I support you whole-heartedly and trust your integrity that your decision was not made hastily. But thoughtfully, prayerfully and in consideration of all the views, opinions and recommendations of every person and groups that were involved directly and indirectly in the selection process.

I hope that this letter encourages your heart that you do not stand alone in the decision that you have made.

My prayers are with you in all of your political endeavors as Mayor of Spokane. Thank you for the privilege to serve along side of you.