Monique Cotton, the former Spokane police department spokeswoman who was given a job in the parks department after raising concerns about sexual harassment from Police Chief Frank Straub, has resigned from that Parks and Recreation Division job. Her resignation letter to Leroy Eadie, parks director, follows in its entirety:
click to enlarge 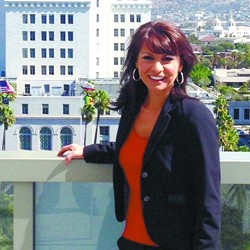 
Dear Leroy,
This letter is to formally notify you that I am hereby tendering my resignation from employment with the City of Spokane, effective February 12, 2016.

My final paycheck, including any cash outs I am entitled to under the M&P-A contract may be deposited into my direct deposit bank account on file.
Sincerely,
Monique Cotton.

Cotton had requested that her allegations that Straub once grabbed her "ass" and tried to kiss her not be investigated and the context surrounding her transfer remain private. A series of records requests, however, revealed Cotton's allegations and the city's role in covering them up.

The revelations have since sparked multiple ethics complaints against Mayor David Condon and members of his staff. The lack of an official human resources investigation into other aspects of Straub's management style surprised even Cotton.

"I went to the mayor fully expecting the accusations would be enough to launch a human resources investigation," Cotton told the Inlander in December. "I made it very clear I would cooperate in a hostile work environment investigation, and I fully expected someone would ask me questions about what happened to me."

So far, Cotton has refrained from filing a suit against the city, unlike Straub or Nancy Goodspeed, the parks department spokesman Cotton effectively replaced. But Bob Dunn, Cotton's attorney, suggests that reticence may change now.

"She should have filed a claim a year ago," Dunn says.

Dunn argues that by requiring Cotton to reapply for her job, there was a "breach of the agreement by the Mayor and [City Administrator Theresa Sanders] saying she would have a position away from the police department."

In particular, Dunn lays the blame at the feet of the Spokane Park Board, arguing that Cotton was the victim of internal battles between the city administration and the Park Board.

"She wanted to be employed by the city. And she was, until the Park Board got their britches in a twist and decided they wanted to make her an example," Dunn says. "She’s without a job. She’s subjected to emotional distress and derision, [because of] all sorts of interplays between powermongers."

Cotton's placement in the parks department had irritated some Spokane Park Board members, who were concerned that the city was abusing its expanded power over hiring and firing in the parks division.

“We had a situation today where we clearly needed help in communications and marketing. [But] I think a person was brought over for a reason that had very little to do with parks and everything to do with serving other needs in the administration,” board chair Chris Wright said at a parks finance committee meeting in October, before the sexual harassment accusations had been revealed. "In my feeling, the administration's conduct on hiring this year has been disingenuous at best."

At that meeting, Wright noted that Eadie, the parks director, had promised the board that the ultimate hiring of the marketing and communications manager position would be through an open process. In December, Eadie confirmed that Cotton would have to reapply for her job.

Dunn says Cotton felt the brunt of the board members' skepticism.

"It seems that over the last several months both Wright and [board member Andy] Dunau had decided they were going to pick on Monique like some sort of schoolyard bullies because they had wounded sensibilities," Dunn says. He suggests that Dunau and Wright were personal friends with Goodspeed and didn't agree with Cotton's appointment. Calls to Dunau and Wright weren't immediately returned.

He particularly cites a meeting, back in November, where Cotton felt that Dunau had acted dismissive and exasperated while she was presenting. He also notes that the Park Board cut $50,000 of the public outreach fund she was in charge of.

But the more recent event that spurred her resignation, Dunn says, was the interview process Cotton was being put through along with several other candidates. He suggests that, because of Cotton's talent and experience, she should have been a shoo-in for the position.

The larger theme, Dunn argued, is about a poisonous and retaliatory culture in the city of Spokane.

"She was being retaliated against for being a whistleblower," Dunn says. "This is a toxic environment for women working for the City of Spokane. She complained about the sexual harassment; they moved her into a job that wasn’t permanent. Lo and behold the job she thought she was supposed to have, because she came forward, [wasn't guaranteed.]"

How worried should the Inland Northwest be about the Zika outbreak?

SpIFF 2016: A night with Frank and the Wondercat