Stuart Danford
De Leon's Taco & Bar is moving into the Logan Neighborhood.
DE LEON'S TACO BAR NO. 2 ON THE WAY

Favorite local Mexican food purveyor De Leon Foods announced this week that it’s expanding to Spokane’s Logan Neighborhood with the second location for De Leon’s Taco & Bar. To be located at 1801 N. Hamilton, in a building previously occupied by Chapala Mexican Restaurant, the taco bar is slated for a late summer or early fall opening.

The forthcoming restaurant is owned by Sergio De Leon and family, who also operate both Spokane-area locations of De Leon Foods Mexican deli and grocery, which annually lands in the top three for the Inlander’s Best Of readers poll for “Best Mexican Food” and “Best Tacos.” 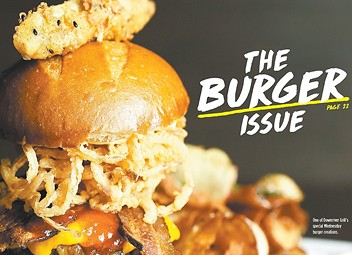 You can still drool over our Burger Issue online!
In January, we presented readers with our first ever Burger Issue, which included roundups of the region’s best “bargain” burger nights, our staff’s favorite burgers, noteworthy vegetarian and vegan burgers, a guide to the many styles of fries and much more.

In the time since, a few notable updates to the Inland Northwest “burger scene” have come up, which are definitely worth sharing.

First up, the local fast-casual burger joint from chef Adam Hegsted, IncrediBurger & Eggs, is already set to expand into North Idaho. Word is out that the second location is planned for a newly constructed strip mall in the Ramsey Crossing development of Coeur d’Alene. No word on when, but if we had to guess it’ll likely debut sometime this summer.

Now joining the growing list of local restaurants offering once-weekly burger specials is the South Hill’s Remedy Kitchen and Tavern. Every Monday, from 5 pm to close, Remedy is serving up a special burger of the week for just $7. Not all featured burgers will be the traditional beef; this Monday the restaurant featured a chicken avocado sandwich with lettuce, tomato and bacon. Hit up Remedy’s Facebook page for details and previews of forthcoming specials.

When it comes to “good and cheap” burgers, Roger’s Ice Cream & Burgers in Coeur d’Alene is a tried-and-true local classic. New to the venerable establishment’s offerings is the “Craft Burger of the Month” program, which kicked off this week with the “Uncle Sam” burger. The seared beef patty is topped with Tillamook cheddar, seared pork belly, sliced lettuce, tomato and buttermilk-fried onion rings with a grilled bun and barbecue spread. If you’re looking to add another treat to your order, this month’s featured ice cream flavor is wild mountain blackberry.

IN THIS WEEK'S ISSUE
Find out more about two local breweries' barrel-aged beer programs. We also give the scoop on a new Tennessee-style barbecue spot in North Spokane and a new coffee spot from the Coeur d'Alene owners behind Bluebird Midtown and Syringa restaurants.